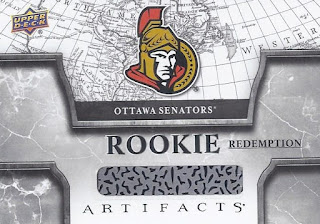 A couple case breaks in one post. One trip back in time to the fall, with an Artifacts break, and some fresh new Synergy afterwards. Here's a rookie redemption that will become a Brady Tkachuk card in the near future. 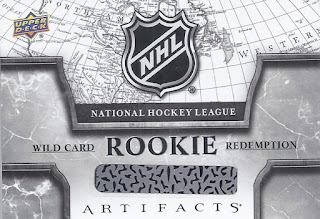 One more, and this will turn into a Max Lajoie card. I also took a flyer on the Hurricanes for this, and got both an Emerald and relic redemption for Andrei Svchnikov as well as a regular Warren Foegle.

With personal boxes of this worked into the equation, I've got about a dozen of various versions of these waiting for fulfillment. 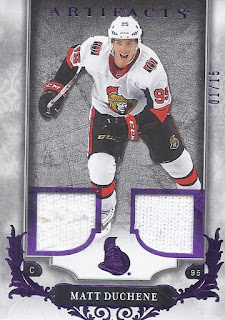 One more card of note from this was this. While these are a pair of plain white swatches, they are both fight strap pieces. These are the first of these I've ever picked up in any context, team collection or not. 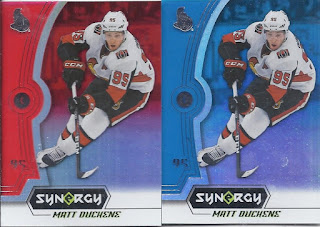 Here are the base cards out of Synergy. Duchene is the Sens only veteran content. Reds are the more numerous ones of these two, but it works nicely with the team colours. The reds aren't considered base cards, those are actually numbered to 19 or fewer. 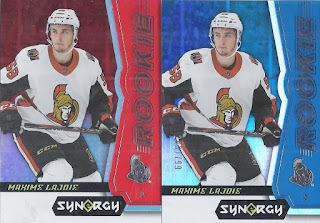 Here's the rookie design. Each of the packs in the release contains at least one numbered card. 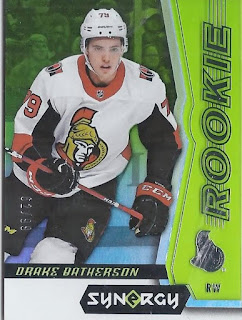 This is as low as my numbering got. There are purple parallels as well.

Here's this year's rookie contingent for this insert set. As with the regular cards, there are lower numbered parallels. 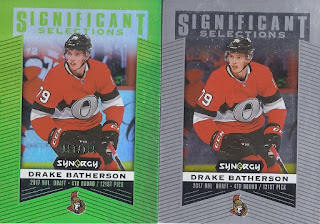 And the final inserts. Batherson has worked out nicely for a 4th rounder.

There you have some more Senators cards. The team may have been a total mess for the past year and a half, but at least the cards are nice.
Posted by buckstorecards at 04:38