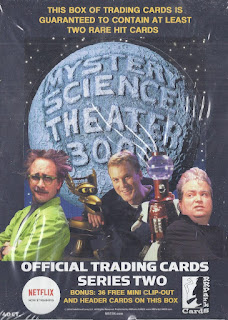 I might as well stay on the box break kick from Heritage, and finally get to show off the goodies from the second series of the RRParks MST3K release. While the box did arrive a month back, it was short one of the promised cards, so I wanted to wait until I got the complete set. 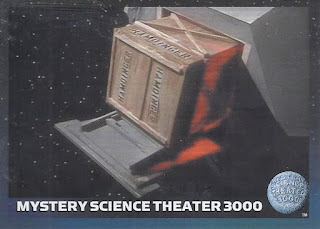 With the first series stopping at the end of the 3rd season, this one covers Seasons 4 through 7. Each episode gets an episode guide card with a screen grab from the episode. Here's Joel making his return to Earth after enduring Mitchell. 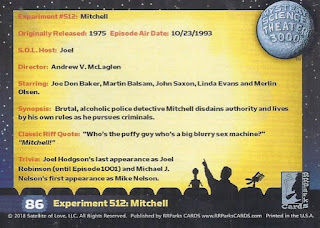 The back of the cards remains the same from before. Mitchell! 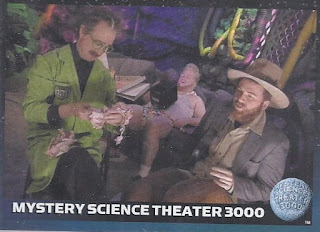 Since the Invention Exchange sort of went on hiatus after Joel left, that portion of the set ends with Season 5. Even then, some of the cards aren't too invention-y. 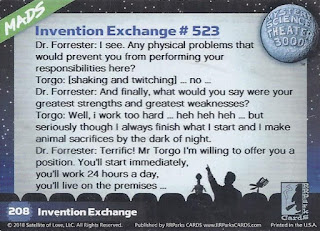 This was actually the card that was replaced. I said I was fine with it showing up in a PWE, and that was fine since it arrived in perfect shape. 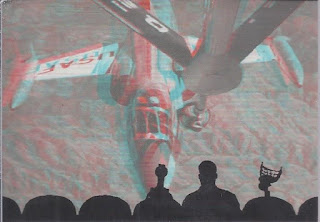 Another returning subset are the 3D cards. Glasses are included in the set, and it brings a whole new meaning to the refueling scenes in Starfighters. "Lie back and think of England's airspace!" 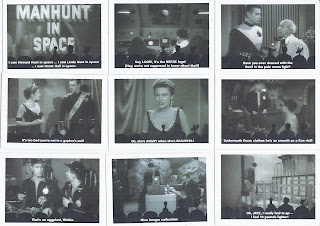 The riff-it subset stays in its page-friendly 9 cards per episode format. As before, this seems limited to movies in the public domain, which is just fine. 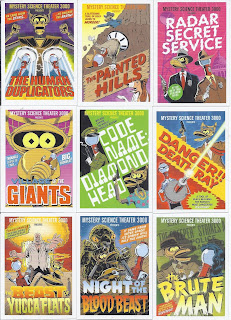 The Steve Vance mini-poster cards are here as well. Please enjoy a sampling there of. 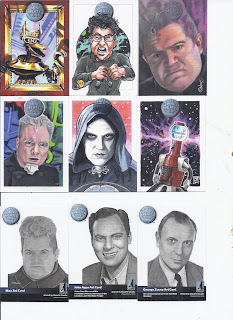 You want more sketch cards? You got 'em! With Max making an appearance, these go right up to the most recent season. 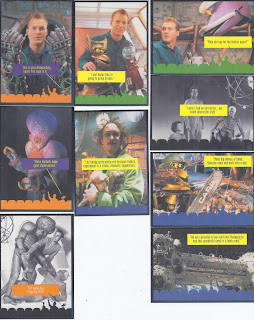 Cards for MST3K: The Movie are new this time. 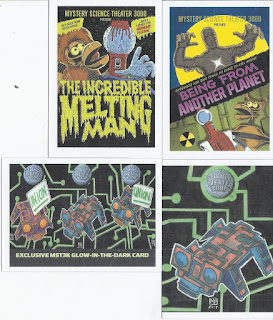 As well as some Glow-In-The-Dark cards. 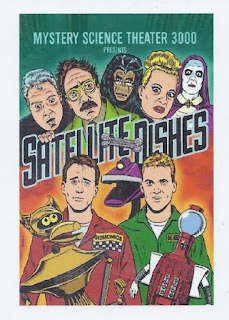 Each box contained a metal box-topper.

Now, things get strange when it comes to collation.

In my Series 1 box, my 'rare' cards were a film cell, and a 1/1 sketch card of Crow done by Andy Moore. What did I get this time? 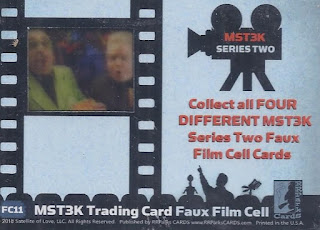 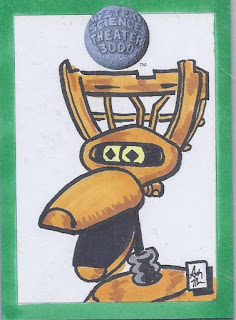 And a 1/1 sketch card of Crow done by Andy Moore.

What are the odds? Good thing I'm team Crow.

And there you have it! Series 3 should wrap up the set, and if you've been paying attention to twitter, you'll know that autograph cards will appear in the set, as images of Bill Corbett and Kevin Murphy signing their cards were shown. That's enough to get me on board for that!

Until then, keep circulating the cards! Although I only had 1 dupe in the box. So...card!
Posted by buckstorecards at 06:25