Mailbag: Yet Another TMM/V Mailer

I'm sure the total number of envelopes, whether PWE or bubbler, that have been exchanged back and forth with Dennis has reached triple digits by this point. So, here's one more! 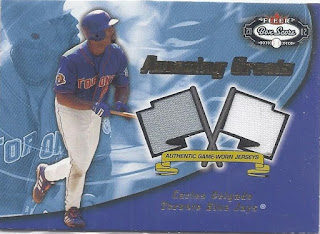 It has been a bit since I've added some Carlos Delgado to my collection, so I'll lead with this one this time. As always, a multiple window relic card is enhanced by having two different colour swatches. 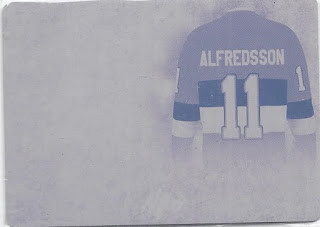 Bills! Bills! Bills! 3 of them, so it is perfect! There seem to be endless parallels in that Epix insert set the McGahee comes from, so if I ever want to do a rainbow page of it, it should be easy enough.

1 card each for the hockey, baseball and basketball portion of the set. Only the Viktor Kozlov is not numbered. Derek Norris regains a tie of the baseball lead with John Marzano. I remedied that quickly, since he's the only person in the collection I've stopped chasing cards of. He picked up the domestic violence special at the end of 2017's season, which was enough for me. 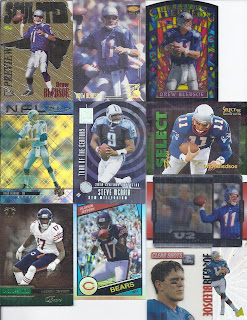 But, football was the bulk of the cards, as is typical of one of these mailers. Drew Bledsoe closes in on being the 5th player to hit the 100-card plateau in the set with 92 appearances. McNair (101) and Jim Kelly (112) still lead the football portion of the collection.

And there you have it!
Posted by buckstorecards at 06:14