Day 2 of the mailbag will be showing off some cards from Upper Deck that showed up as they start fulfilling the redemption portion of 2018-19 Artifacts! 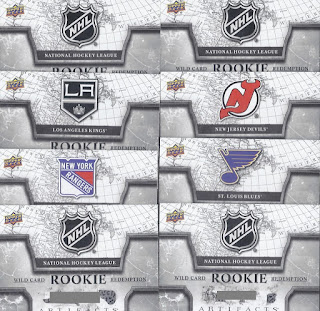 Here's the first 8, which were considered the base rookie redemptions. These weren't hits, just base cards which generally featured players that didn't qualify for a card at pringing. 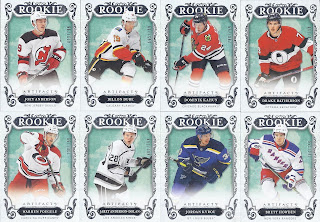 And here are the cards that those redemptions resulted in. Naturally, my favourite here is the Batherson, and I give it bonus points for the alternate jersey. 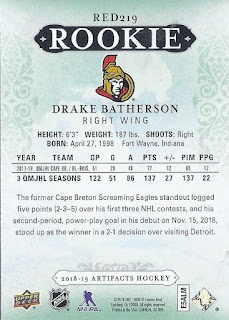 Here's the back of the cards. 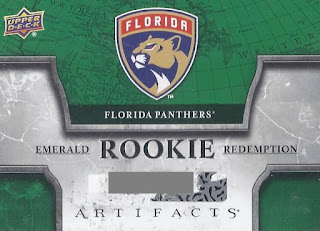 The only parallel of the bunch was this one, and this one lead to this: 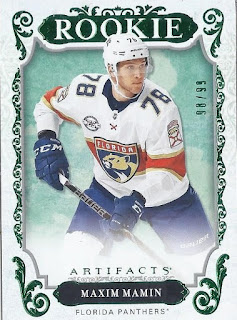 The green foil looks pretty nice with the seafoam colour in the background. 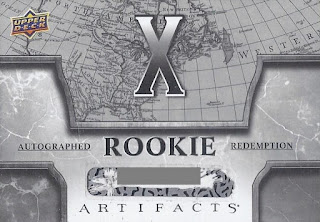 Finally, the hit. In theory, this should be the 10th best rookie of the season. 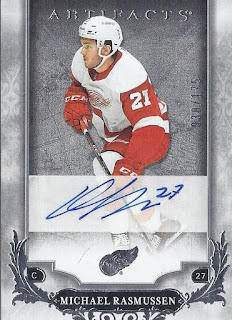 Which this year means that Michael Rasmussen is in that position. He does wear jersey #27, which matches the signature and the listed number, but for some reason UD chose a photo where he seems to be sporting #21.

Even with the 10 cards that were in this mailing, I still have 6 still outstanding. Base-wise I still have Maxime Comtois, Brady Tkachuk, Maxime Lajoie and a second Warren Foegele on the way, along with a dual jersey relic and an emerald parallel of of Andrei Svechnikov.

But clearing out 10 redemption cards from that pile in one go is always good.
Posted by buckstorecards at 08:39