My 2/14 binder is divided up by category. I have separate sections for the 4 major team sports, and then there's the everything else miscellaneous section. That's where soccer, wrestling, Hollywood and pretty much everything else ends up. Here are a few new cards for the binder, coming from my COMC to-be-posted box. 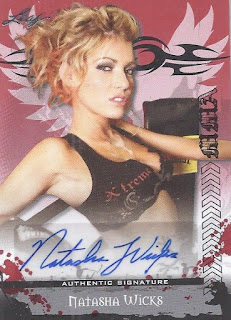 MMA is definitely a misc. binder thing. Natasha wasn't a fighter, but a ring card girl. I guess they count when it comes to cards. She's now Natasha Kingsbury (married to fighter Kyle) and is easily in the top-4 of my collection for signature quality, alongside Darius Songaila, Patrick Ramsey, and someone you'll see later on. 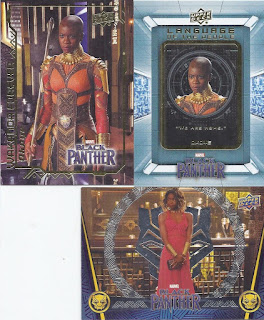 The other familiar face in the collection is Danai Gurira. E-packs made the ability to acquire cards featuring her Black Panther character of Okoye super cheap through COMC. I've also got 2 cards of hers from an Avengers e-pack release sitting in my inventory, which will tie her for the overall lead in that portion of the collection with soccer's Edinson Cavani. These join a pair of cards of hers from The Walking Dead. 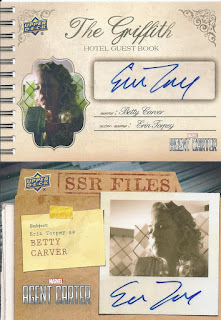 More e-pack stuff, as there was also an Agent Carter release available. This was higher end, with 1 card per e-pack, but it being either an auto or a sketch card. Seeing these up for about $1.50 indicates Erin Torpey wasn't one of the more desired pulls, but I'll gladly take these for that price and add her two cards to the collection. 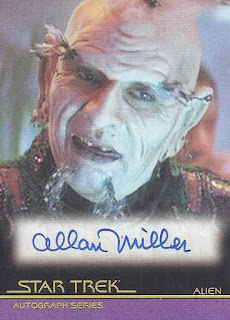 Hollywood brings another new autograph to my collection, and the other contender for great penmanship. He would have been in his early 80s when he signed this card, and has better handwriting than most of the far younger people in the binder. Pretend you're Grandpa Simpson and watch him in an episode of MAAAAAAATLOCK! He's the used-car lot owner without the word 'Honest' in his name. 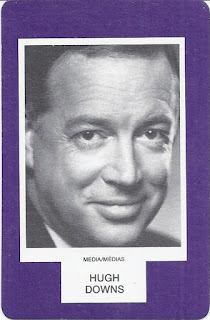 Some sort of guessing game set gets me my first card of Hugh Downs. He's someone with a pretty extensive run in journalism, as well as a game show host. Youtube has this episode of him hosting Concentration back in the 60s. And there's a very familiar contestant to baseball fans - Ralph Branca.
I assume there's more 20/20 stuff out there, but I prefer game shows to that. They're the only genre of programming where talking back to the TV isn't considered nuts. Hugh's still alive as well, turning 97 this past 2/14. 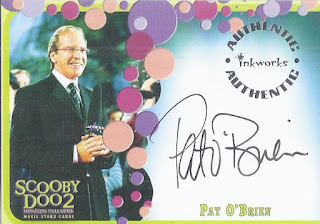 And another media figure ends this, with an autograph from, of all things, a Scooby Doo set. Pat's wiki includes the section "Alcoholism and voice-mail episode". There's no way that phrase can be spun in a positive light.

Posted by buckstorecards at 11:35