I haven't done a Bills post in a bit, so let's show off some more cards that have shown up recently for that PC. Some from COMC, and some from a group break. 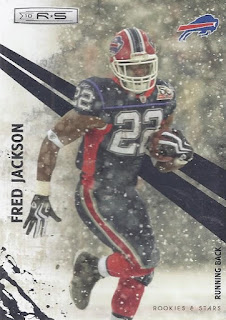 With December fully underway in Buffalo, here's a perfect card for that. 2010 Rookies and Stars had a small subset in the base set of 15 cards, all of which feature outdoor games and weather at its snowiest. A perfect Buffalo card! 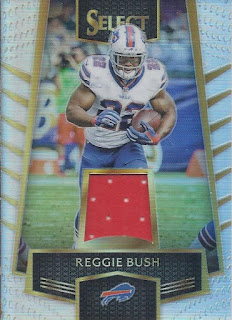 As is this. Reggie Bush spent a season in Buffalo, and set a record for futility when he finished the season with -3 yardage. Yup, that's negative yardage for the lowest yardage for a player with at least 10 attempts. His only Bills card appears to be relics (and their parallels) from Select and National Treasures in 2016. 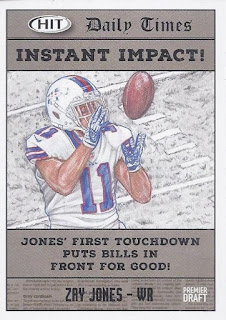 Wipe out the helmet logo and SAGE makes a card of Zay Jones commemorating his first TD. I'd rather they honoured his Star Wars themed TD celebration.

Off to a case break of Rookies and Stars, and these were the three Stars in the set. Only McCoy is still with the team. Yeesh. So many cards in this post that perfectly represent the franchise.

At least the rookies are still around. But now they have game photos at least. 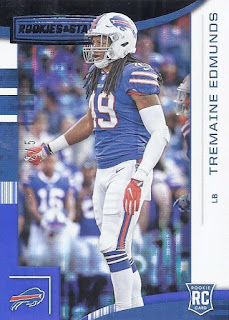 This is probably the best card in this post, a parallel of 1st round LB Tremaine Edmunds numbered to just 5. I'm still more interested in his development than Josh Allen's. 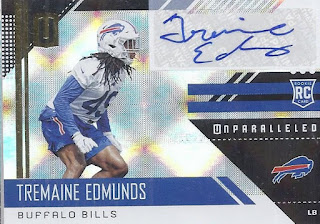 And since seems better here than in the COMC portion, here's one of his autos. 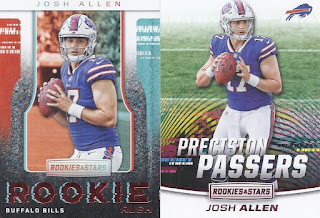 Josh Allen, speaking of him, made a couple appearances in the base set. And yes, the foil is designed, for some reason, to look like a glitchy video feed. 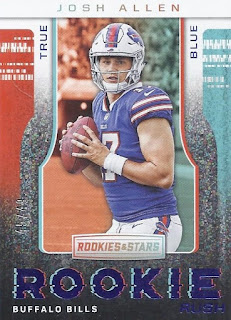 And those have parallels as well. 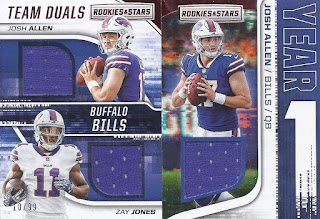 And he also has relics. I've already got his auto, so a couple relics can go nicely alongside those. Zay Jones joins him on the first of the two.

There you have it!
Posted by buckstorecards at 06:41