I was going to spread my Black Friday/Cyber Monday boxes out over the month, but figured that given my post of ugliness on the weekend, I felt it would be fair to post a similar card, also from Panini. 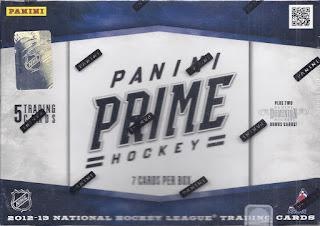 Back to the 12-13 season for this, and the knowledge that at least if there's an expired redemption in this, it will still turn into a card.

There's 7 cards in this, 2 are Dominion, and the other Prime. But that will all be the same in the end compared to a typical Prime hockey release. 2 base cards, 5 hits. 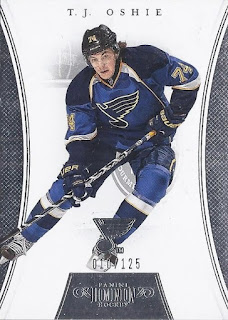 The Dominion base is typical of what you get from similar Panini releases. Silver and a white background. 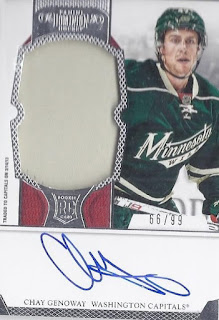 And your Dominion hit. Just a fraction of prime in there, with a slight bit of stitching visible over the lower corner, and a hint of green below the frame. He played one game for the Wild, and that's it for his NHL experience. He was one of several one-gamers in the 12-13 rookie class. 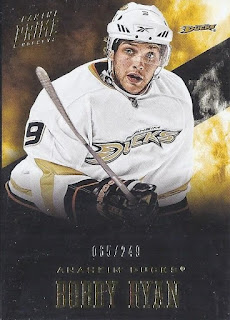 A current Senator was the base card in the Prime pack. 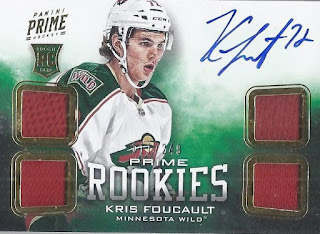 I guess this is technically a base card as well based on the numbering scheme. Much like Genoway, Foucault was also a one-gamer, but that's still enough for a card. 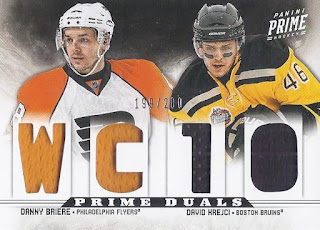 While I doubt these are from the 2010 Winter Classic, at least one of the photos is. 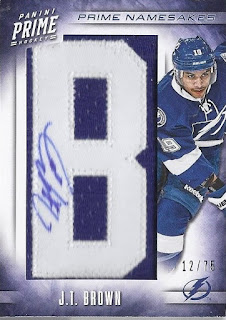 Even if there's an autograph to go along with it, a manufactured nameplate card shouldn't look better than an actual one. Brown's a rarity for players in the 12-13 rookie class as he's still in the league, now with Minnesota. 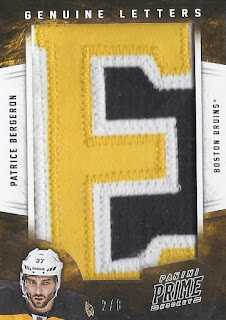 Now this is what a nameplate card should look like. No need to use the "ugly" tag on this one. And unless this can turn into a card I really, really want for the PC, what a sure keeper!

Posted by buckstorecards at 10:04