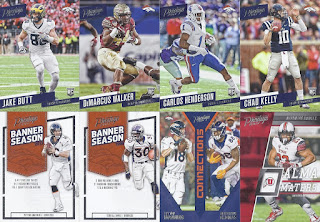 Here are the inserts and rookies from the group. Chad Kelly is 2017's Mr. Irrelevant, and he's also the nephew of Jim Kelly. That's easily my favourite of this group, although I'm sure someone would prefer the card in the upper left. 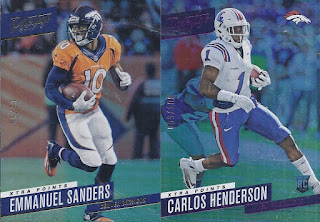 Here are the parallels. Sanders is gold /50, while Henderson is purple /100. 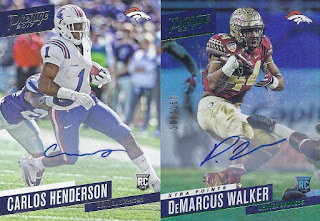 And this time I get a pair of autographs. Neither has worthwhile penmanship, but if I had to pick the better of the two, I'd go for Walker. At least he lifted the pen off the sticker at one point. Walker was a 2nd rounder in the past draft, while Henderson went in the 3rd.

And the silver packs: 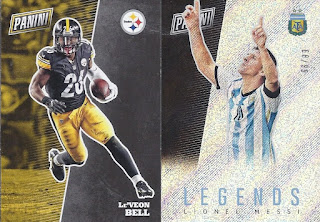 As I wrote last time, those in the Legends portion of the set that are still active have their photos in colour. The /99 versions are the Rapture parallels. 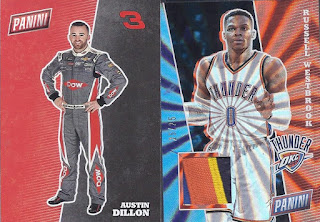 Easily the biggest hit from the packs was this Russell Westbook. 4 colour patches on NBA cards aren't that common in the first place, and to get one of the reigning MVP is even nicer. This is the Rainbow Spokes parallel, and is /25. 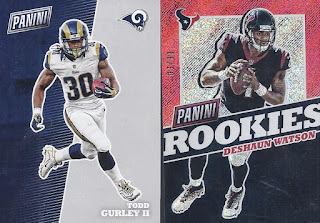 And here's the second straight post with Deshaun Watson making an appearance. Another Rapture parallel as well.

Autographs, a sweet patch and some low-numbered parallels. That's some good stuff. The last of the NSCC breaks show up in the next post, as I flash back one year to 2016 Rookies and Stars. Even better for me, the randomizer landed on the Bills, so I'll have plenty of keepers.

Posted by buckstorecards at 06:50