The product isn't even a month old, but I have busted enough packs, and saved enough wrappers so far to qualify for a wrapper redemption pack. They contain 5 red parallels of base cards from the set, and 1 red mini. Let's check it out! 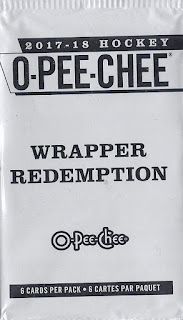 Not a very spectacular design, but this isn't designed for display. 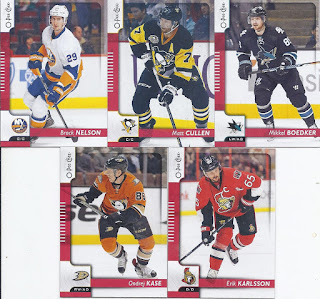 That's actually a pretty good pack for my PC additions. Boedker will go nicely into the hits/parallels portion of my Kitchener Rangers alumni binder. Still, the best is that Erik Karlsson. I saw a Sens logo on the card back when I opened the pack, and was elated that it was his card.  Beyond that, there's an alternate jersey and an anniversary patch. I guess that means Brock Nelson is the dullest of the batch. 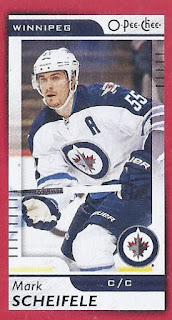 And it is a local kid on the mini!

While there weren't any parallels of the major rookies in the pack, that Karlsson made hanging on to the packs more than worthwhile.
Posted by buckstorecards at 08:43