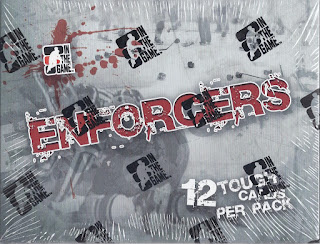 I friggin' love this set.

Correction. I love the checklist for this set. Plenty of names without certified autographs - guys who will never get any love in a new Upper Deck set getting hits. And who wouldn't want autos of some of the crazier guys ever to play the game? Good crazy, mind you. 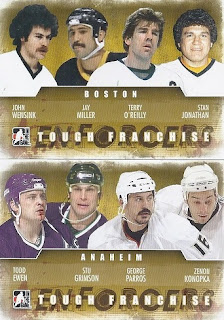 Such as these guys appearing on the base. Of the Bruins, only Terry O'Reilly has shown up on any recent cardboard. Despite spending 3.5 seasons in Boston, Jay Miller's only Bruins cards are after retiring. And is Stan Jonathan wearing a brillo pad on his head?

Anaheim does bring some more recent names to the plate, but such is the nature of the franchise. We also have our first deceased player of the break with the late Todd Ewen. Depression is a bastard. 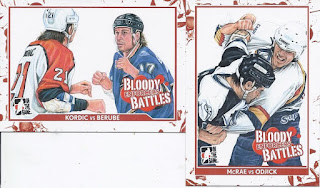 These painted cards might be my favourite of the inserts. The style makes it easier to work around the lack of licensing. the Kordic here is not the late John Kordic, but his brother, Dan. 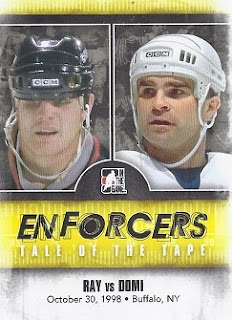 And yes, the Tale of the Tape cards do include the total PIM of the players among the stats. Why wouldn't they? BTW, Domi beat Ray 3515 to 3207.

Strangely, while I avoided dupes among the hits, all of these were already in my collection, except for the Bruins cards.

On to the hits. 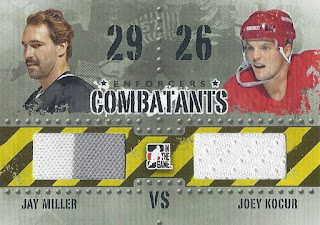 Jay Miller makes his second appearance of the break, showing up as one half of the dual relic. This might be my first silver Kings relic, even if it is only half the swatch. I've already got a Kocur relic from this set, which he shared with Dave Manson. Miller put up over 1700 PIM over his career, and it is a step down from the 2100+ Manson accumulated. 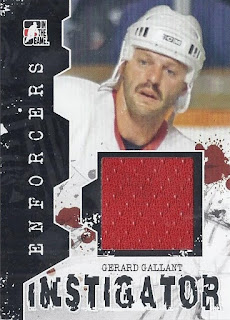 And my second swatch. Bright red. Just like any Detroit Red Wings relic should be. Despite the last name, he definitely qualifies as an enforcer with 1674 minutes in the sin bin. 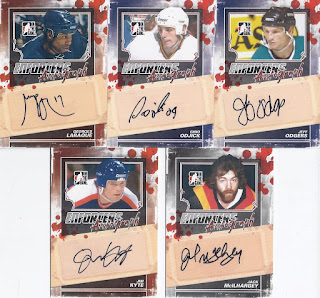 And the autographs. Gino Odjick was one of my favourite tough guys in the 90s, and I'm really happy to get an auto of his for my collection. I'm also happy to add the McIlhargey, if for no other reason than the photograph. He seriously looks like someone who has dumped at least one body in the Pacific. That and the flying V sweater makes it a sure keeper.

As I said. I friggin' love this set!
Posted by buckstorecards at 11:33