You know that I'm a repack addict, and will pretty much try anything repack related I see. I had seen these before at Wally World, but not for a bit. 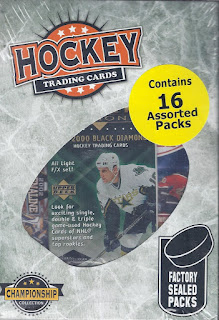 16 packs, and I was intrigued since of the three visible packs, I don't think I'd ever busted anything from those three sets. So, I bought one of these.

These were the 16 packs in there:

An interesting mix of cards. 16 packs divides nicely by 4, so I can split this over 4 posts over the next whenever. Time to fire up random.org and see which packs get shown off first. 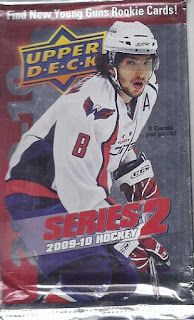 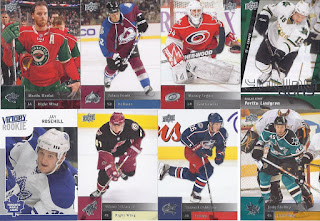 AS one could expect from Upper Deck, the first photo out is an interesting one with a National Anthem shot. But then it goes into a bland state with generic photos. I got a Young Gun, but I had no idea who Perttu Lindgren was. Further googling showed me that he played in 1 NHL game. At least Jay Rosehill has reached the 100 game mark, and is still active in the Flyers system. 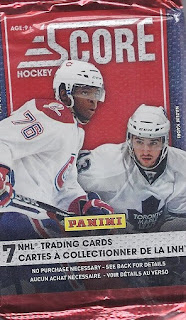 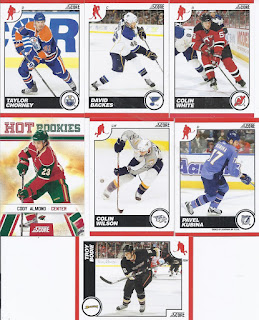 This one didn't even have a photographic keeper in the bunch. At least Cody Almond played more games on this side of the pond than my Young Gun. He reached 25 games, and is now playing in Switzerland. Troy Bodie was the one-per-pack glossy card. He's another guy I'd never heard of, despite some time with the local Leafs. He retired a couple months back, and is now a scout in their system. 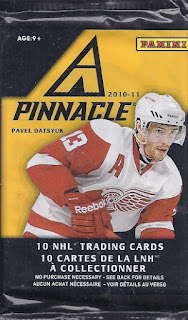 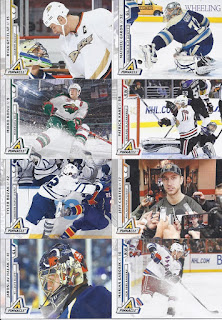 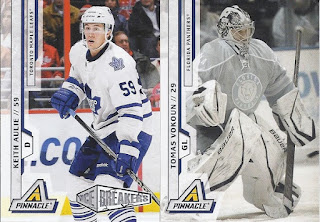 Here's the Pinnacle stuff. It is a pack full of keeper cards based on the photography choices in this pack. The Gaborik is the dullest of the photos, but it remained a need in my 2/14 collection. Halak was a dupe for my mask collection, but it is still a nice keeper for my misc. binder. The Vokoun was puzzling at first, because I don't remember anything about the Panthers wearing silver.

The back answers the story: 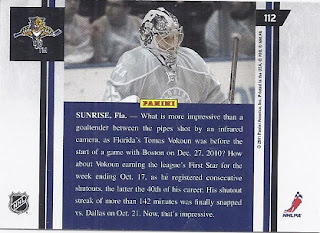 Infrared camera shot?  Might that be the first card with that style of photo? Either way, that's really cool. 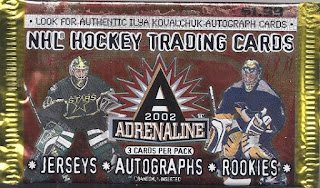 Only 3 cards, but all are keepers. The Power Play inserts are one per pack, which seem to defeat the purpose of an insert set in a product with only 3 cards per pack. The Havlat is the only base card in the pack, but at least it was a card for my Senators collection. Finally, the Hull is actually a pretty tough pull. The odds for it are listed at 1:97. By comparison, relics fall at 1:73.

So, there you go! 4 packs down, with the next packs coming whenever I feel like it.
Posted by buckstorecards at 08:28