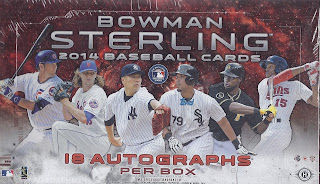 This might be the most I've ever spent for a box of cards, but since I was doing it with credit, I figured I might as well splurge. I was debating between this and a box of America's Pastime, but went for this since I was more likely to end up with a 'good' auto or two from this, and I was more likely to find some trade bait for the various team collectors. So, if I regularly trade with you, and you're a team collector, you might see something that will be sent your way in one of these Sterling posts. 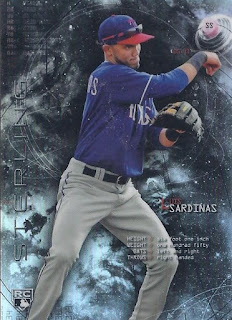 Here are the first 3 autos. CJ Edwards made his big league debut around the time of this past season's roster expansion. Peraza also made his debut this past season, making a handful appearances with the Dodgers after a trade. The Ventura is a rookie auto, as opposed to the prospect auto on the other two cards. Going 3 for 3 in the first pack for players that have already appeared in the majors is a good start. 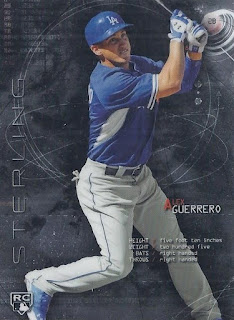 I always enjoy getting cards of those players that have defected from Cuba, so an Alex Guerrero is a nice start to this pack.

Here's my first on-card auto of the break. Michael Kopech is still in A ball after being drafted in 2014. He also earned himself a 50 game special last season. Alcantara seems to be a career minor leaguer, never going above AA ball since his debut in 2010. Interesting variation on the auto though by adding the final A in his name. The last one is the only redemption I pulled, but I have no complaints about getting a Conforto. I already have one from a previous group break, so the eventual card will likely be COMC bound.

2 packs down. 4 to go. With tomorrow being a football day, I'll probably dig into one of the two mini boxes of Select. Until then!

Posted by buckstorecards at 09:57