Let's move past the halfway point with Sterling and show off 2 more packs. 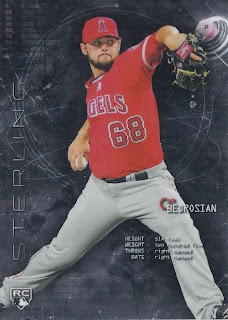 Base card #3. Cam's been up with the Angels for a couple seasons. He's a second generation player, being the son of Steve Bedrosian. Steve's nickname was Bedrock, so it makes sense that Cam's middle name is Rock.

More stickergraphs here. Strangely, the set includes both on-card autos and stickergraphs of Piscotty. He reached the big leagues this past season, and showed some promise, batting .305 with 7 HR, and added 3 more in the playoffs. Alen still isn't in the bigs, but climbed to AAA this past season. Baez has reached the bigs as well, but is a SO machine there. Unfortunately, he isn't a pitcher. 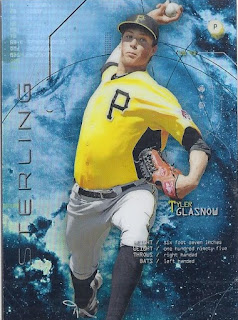 The lowest numbered card of the break was this base parallel to /25.

And some more sticker autos! Rosario hit the majors last year, and was respectable, batting /267 with 13 HR and 50 RBI. Beede is the top-ranked prospect in the Giants system. La Stella was with the Braves last season, but was traded to the Cubs in the off-season.

And there's two more packs down. The big hit for me is still to come, though.