Another Bank^h^h^h^h Breaker Error in Your Favour!

This has been a long time coming. Since August in fact, but it was made right. I got into an early break of 2015 Panini Prestige Football. I landed a pair of autographs from that break for my Bills collection, a Karlos Williams and a Nick O'Leary.

But, since there was another case break of the product at the same time, I think the Bills orders got mixed up and I got the hitless Bills break cards instead of the auto-ed ones. I contacted mojobreak, and they made it good. They refunded the cost of the break, which would have been fine with me. But they also offered to get replacement autographs.

And here they are: 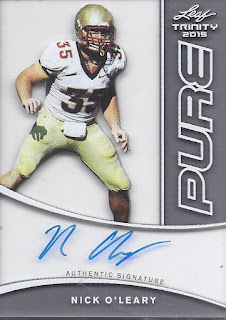 Here's the Nick O'Leary replacement. Since he's a late round draft pick and a practice squad guy, it is even. Both were unnumbered. Although this one lacks the Bills logo, it does have a different look to it with the clearness to it.

The big upgrade came with the Williams. Instead of an unnumbered base auto from Prestige, this was the card: 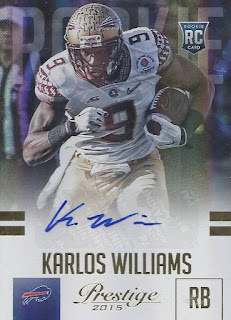 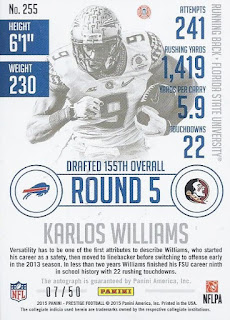 It is a major upgrade, turning into a /50 gold parallel with the autograph. Combined with the Dez Lewis from earlier this week, this is my 3rd Buffalo Bills auto of their 2015 class. Ronald Darby is still missing in it, but hopefully that will enter my collection in the next few months.

Interestingly, 3 of the 4 Bills rookies from this year's product are Florida State Seminoles alum. Did a Buffalo scout's car break down just outside Tallahassee?

Posted by buckstorecards at 08:53