It's autopost time for me, as it is Grey Cup weekend, and as you read this, I should be on my way to Regina to see my beloved Hamilton Tiger-Cats play. All I ask is that they surpass their point total from their trip earlier this season into Saskatchewan. All I need is a rouge for that to happen.

But enough of that, off to the card: 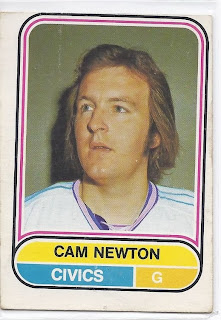 Probably not the Cam Newton anybody but me was thinking of. It isn't just his rookie card, it is the only card of his career. He played most of his career in the WHA, but did have a cup of coffee with Pittsburgh. As for the team, they started as the Denver Spurs, relocated to Ottawa part way through the first season, and folded halfway through that season.  That has to be a record for franchise futility. Half a season with a relocation thrown in for good measure.

Anyhow, why this card? Cam Newton now drops off my list on an attempt to acquire at least one pro level card of every Kitchener Ranger alumni who ever made the bigs and got an NHL or WHA card. The list now stands at 3 with Sean McMorrow, Don Laurence & Claire Alexander are still outstanding to complete that Frankenset.
Posted by buckstorecards at 16:30