I decided to try a hobby box worth of Series 2 at Upper Deck's epack site, with a goal of trying to finish off the OPC Update set, through the box and through trading. And thanks to a dupe of a Young Gun and a Young Gun Canvas set, I was able to do so, while also turning a couple other inserts into a bunch of Hamilton Tiger-Cats parallels and a nice Kitchener Rangers insert.

This post has nothing to do with that, since those won't be arriving here until the late summer. I'm focusing on one of the new Young Guns SPs that joined the set.  I could have focused on the Sorokin rookie. The Romanov wasn't bad either. 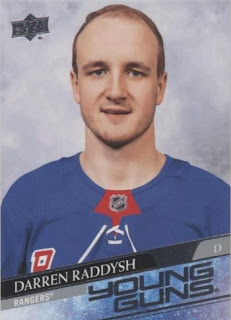 Based on the photo Darren is either a 25 year old minor leaguer, or a 55 year old shop teacher from White Plains.
And you could easily convince me that either was true.

Posted by buckstorecards at 05:04