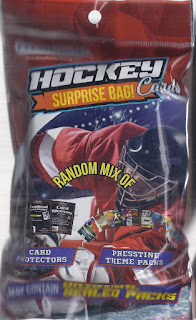 I've got a new source for repack acquisitions. In addition to the Dollarama, Presstine repacks have surfaced at 7-11s in town. They only seem to have hockey in terms of sports cards, but maybe others will show up in the future. After seeing them at the store, I grabbed one of these surprise bags, and a couple 20+1 hit repacks. These are the same that are available through Presstine's site. 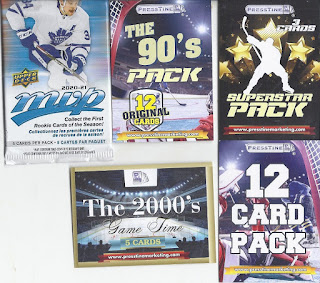 These tend to have more card content than the Dollarama ones. And these are what this one held. The MVP pack looked to be the same that would appear in blaster boxes. Clockwise from the upper left, as I usually do. 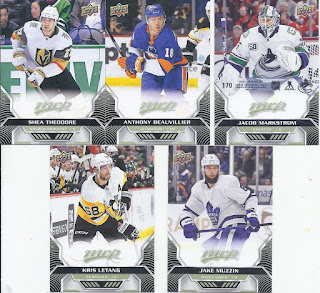 4 base cards, and a puzzle back parallel in the MVP pack. There's 1/9th of a Claude Giroux on the back of the Markstrom. Those are 1:8 for blaster packs. So, yay??... 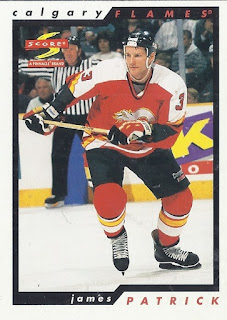 While I usually do scan all the cards in these, I couldn't it be arsed to do so for the 90s pack. Lots of 1990 Bowman, 1991 Score and 1991 Pro Set. This was the only one that interested me in this, and that is because of the bad vertical centering, so that's what I opted to scan.

Here's the pack that promised 3 superstars. Yzerman? Certainly. Taylor Hall? Probably. Nylander? Maybe not quite yet. But that 2 for 3 is still a pretty good average. 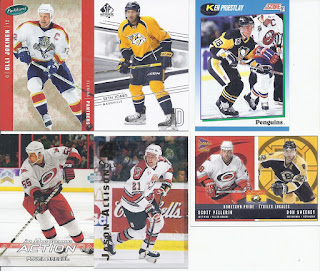 The misc. 12 card pack was at least interesting enough to warrant scanning everything. That's a pretty sweet Portland Pirates minor league card for the Allison. While the Sweeney/Pellerin dual is a hometown pride card, it is more of a home province pride card for the pair of New Brunswickers. 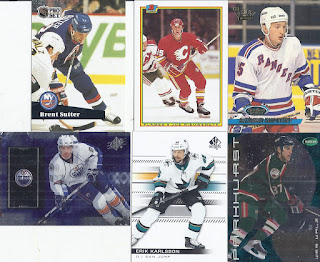 That SPX card sure puts the centering issues back on that James Patrick into perspective for comparison's sake. Unless it is supposed to be a double-image, can't-read-the-name parallel. Then WOO-HOO! An ebay 1/1! 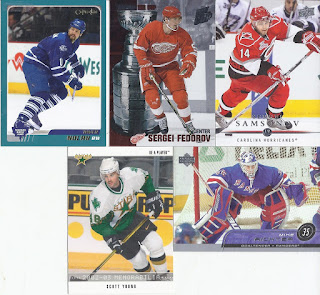 And your final pack, the 2000s one. On the whole, probably the best of the ones in here, with that Fedorov being a really nice insert from Pacific's Quest for the Cup. I couldn't have told you on a bet that Scott Young was still in the league in the early-mid 2000s to get a card in 2002, let alone still get them in 2005 after the lost season. And finally, that Mike Richter is such a great card for the mask binder, with his famous design front-and-center on that horizontal entry.
Not bad as a pick-up instead of a hobby pack for a similar price. Either way, the odds would be long I'd get my money back, but at least these are interesting.
Posted by buckstorecards at 07:30