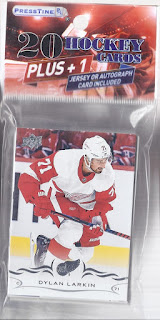 And the other one!\ 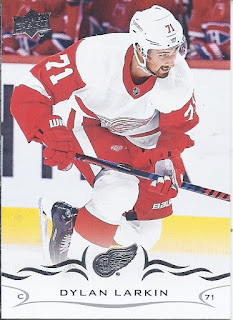 Here's a closer look at the opener. I've probably already sent this to Ann Arbor at some point - I guess I could always be certain and sent it again. 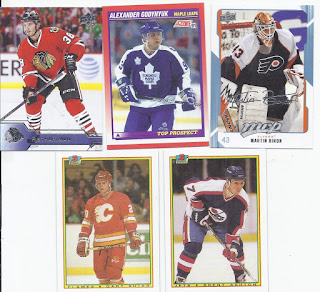 The first batch of cards. Pretty much what I expected, but at least I can add the Biron to the mask binder. 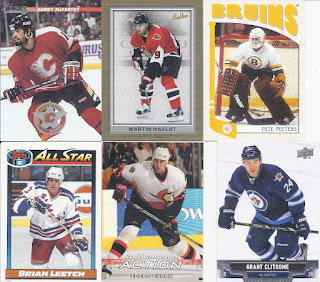 The next batch is pretty good, though. A 'Decages' card with Peeters. a pair of Sens cards (and I don'r really have that many Chara Sens cards), and one of the more immature names in the game in Clitsome. Then again, Peeters can also be seen that way. 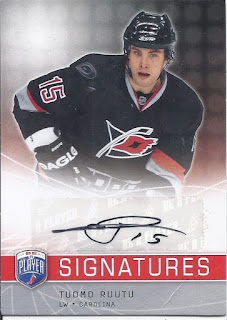 And the hit is an auto in this one. Not a bad one, but the card isn't exactly in good shape. That isn't part of the design in the lower right - that's a very obvious crease. I'm still picking the Sens cards as my favourites so far. 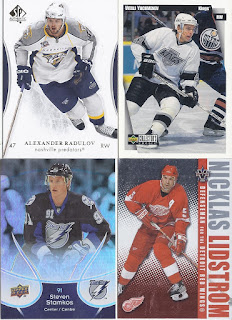 Stamkos seems to be the obligatory shiny card in this. The Lidstrom is kinda foily too. 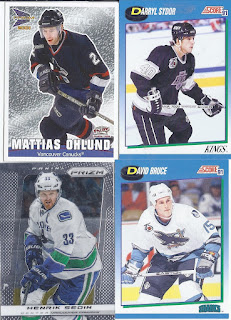 Ending this is a four-pack from the Pacific Time Zone. Bruce is a Kitchener Rangers alum, but that's gotta be a dupe. While the Ohlund really doesn't look very Prizmy, it is a McDonald's card. Yay for the food issue! The Sedin is more what I'd expect from a Prizm card, and it was the visible card on the back of the repack.
It would have been a pretty good repack, if not for the damage to the hit. Still nice to get that Chara, though.

Posted by buckstorecards at 13:00