And some more cards that have been spending way too much time in the Too Be Posted Box. 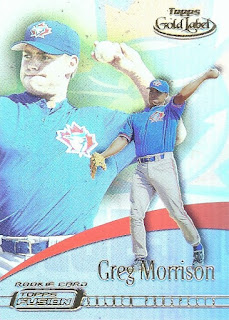 A Gold Label start? Sorta. This was from 2001 Fusion, a set that combined designs and/or brands Topps had previously used in a whole new set. Given my love for stuff like Rookie Anthology and Chronicles, I probably would have been all over this release at the time. Alas, it was one-and-done. 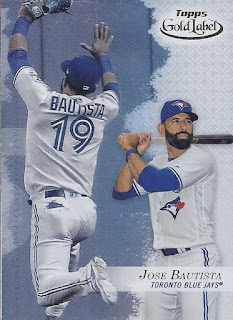 If a more traditional Gold Label card is your thing, here ya go! And a bonus, you get Jose Bautista's defensive skills getting the spotlight on the photo. 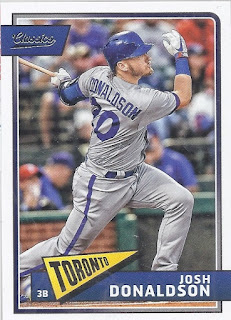 I mentioned Chronicles earlier, so why not show off one of those? One of my favourite recent designs from football, 2018 Classics, got re-used in the baseball release of Chronicles. They nicely used the pennant motif from another favourite of mine, 1965 Topps so I really can't hate any set that utilizes it. It would also appear in their basketball release. Why stop using a good thing? 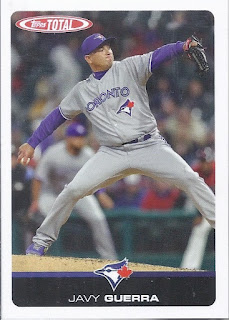 The final Jays card sees Topps Total make an appearance. Given how this set was released in stages throughout the season, you'd get card of players who only made quick stops with their teams. Javy did not put up the best numbers with Toronto, so he'd move on quickly. Fortunately for him, he got picked up by the Nationals, and would get a World Series ring for his efforts. But this card was his only 2019 entry, and he hasn't made a cardboard appeance since.
Such is the life of a journeyman middle reliever.
There you have it!
Posted by buckstorecards at 19:36