Cards can sit in my "COMC to-be posted" for a long time. So that leads to posts like this one: 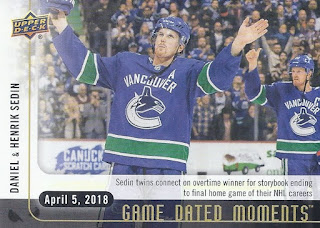 A post where I show off a card that I bought more than three years ago. I guess I probably should have waited until this got a season highlights card in the 18-19 O-Pee-Chee set instead of shelling out for this one, but it is still a pretty nice card with a nicely framed photo of the Sedins.

At least I posted this before they got the enshrinement call to the HHOF, although that was helped by the fact there won't be 2021 class, with their likely induction delayed a season. 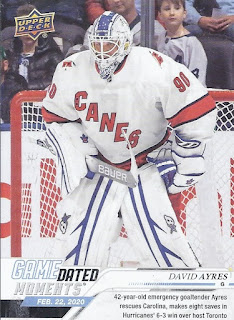 The time to get around to posting this one was a little more than a year. Again, a second option highlighting this moment would come out when SP Authentic dropped, giving him a Young Guns card for this Emergency Backup Goalie work. And much like Scott Foster's Marquee rookies cards from 2018 OPC, these cards saluting their rare appearances still demand a nice sum from collectors. Long live cards saluting rarities!
And there you have it!
Posted by buckstorecards at 11:01