Rookie Anthology by Any Other Name is...Chronicles?

With Panini's disappearance from the hockey market, it marked the sad loss of my favourite product, Rookie Anthology. Throw a bunch of sets in a blender, and then put them out in one single release. Chronicles does come close, but it might need to have its base cards make more appearances per box to really get that vibe. 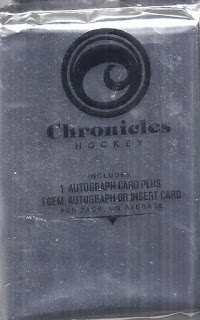 But that doesn't mean I won't try some Chronicles hockey. Only 2 cards, but there are only 2 potential subjects, Kaapo Kakko or Vitali Kravtsov. At least that makes a recap of the one pack easy! 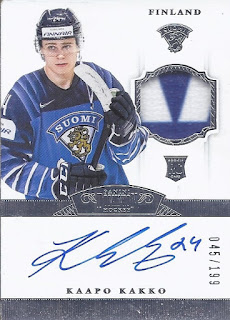 If there are no base cards, I guess I can go right to showing off the hits. I watched a couple of breaks of these packs, and saw that there were cars of Kakko both with  Team Finland, and with New York. Since the former apparently had licensing with the Finnish National Team, and could have big bold logos on the card, I was hoping to land one of those, and here is one of 'em! The design is basically the same as the 2013-14 hockey RPAs, and it still holds up with a nice-sized signature, and an appropriately coloured patch. 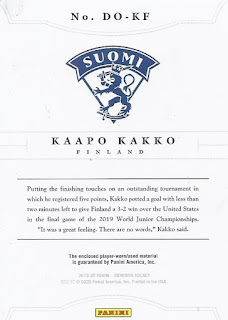 Such a great logo shouldn't be limited to the front of the card. 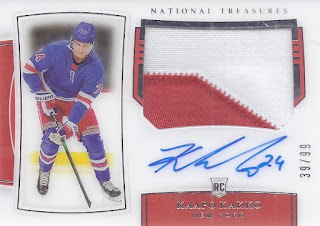 Looks like this was two Kakko pack. While lower numbered than the Dominion card, and with a larger patch, it doesn't really come close aesthetically with the logo-less jersey. They keep the design from the true rookies in 2019 National Treasures releases. It is still a solid look, and my only real complaint is that I probably would have used Rangers blue for the borders instead of red. 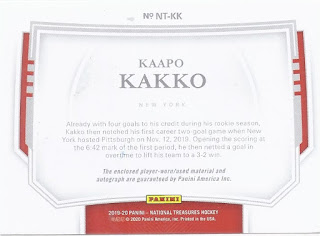 And here's the back of the card. I showed one - might as well show both of 'em. Exactly what one would expect from a National Treasures card.
There you have it!
Posted by buckstorecards at 05:02