Now, a switch to cards from some inexpensive football randoms. These are from breaks of 18 Optic and 18 Rookies and Stars.

The R&S break randomed the Chiefs and Browns in my direction. 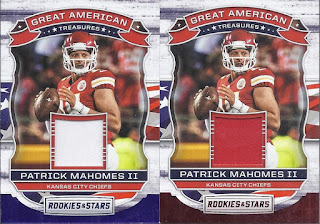 KC doesn't really have any major rookies, but the stars portion was solid for them with these two relics.

Rookies and Cleveland means that you're probably going to see a lot of Baker Mayfield. And he certainly showed up. 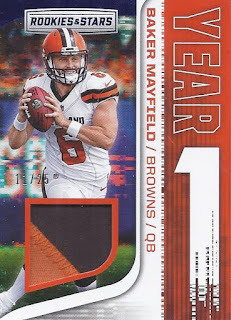 And although an autograph of his wasn't in the case in question, a patch from a jersey that he may have worn for 5 seconds did. 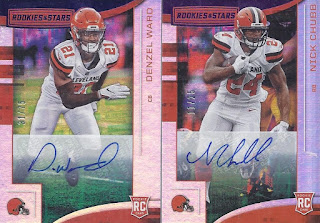 But there were a couple of pretty good rookies with their stickergraphs in the case. If I don't get their first pick, their second and fourth picks will do fine. 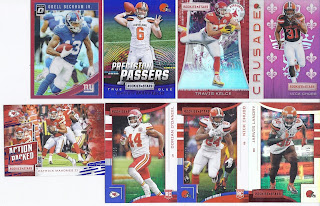 Here's all the numbered parallels from the case and the half-case. As you can see, one of the teams I was randomed in the Optic case was the Giants. I also got the Lions, who were a big *womp* *womp*. But the Giants came through with a card that I believe was a case hit.

It has a patch.

It has an autograph.

It is limited to 15 copies. 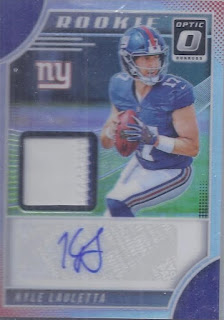 At least his time on-field wasn't as bad as Peterman.
Posted by buckstorecards at 10:44