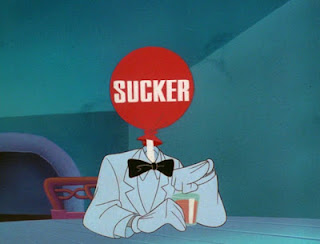 About a month back, these repack boxes started gracing the shelves of the local Wally World. 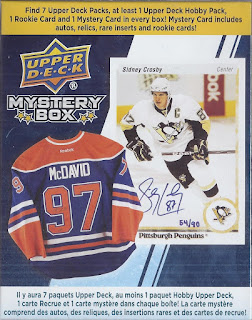 Despite the large UD logo on it, this remains a repack product put out by the repack company, not UD. these They were a little costlier than the usual repack boxes, so I passed on them. I wanted to see a sample of what was inside, so watched a couple breaks on youtube. The reviews were dire at best. I opted to pass.

But I still couldn't resist taking one of them. Yegads I'm a sucker for repacks. 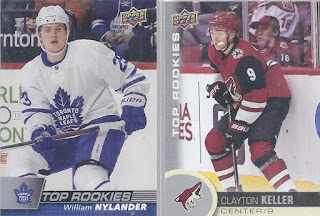 Here were the rookie and mystery card. They are both from boxed set releases.

As for the packs, they were.

I think I got two hobby packs instead of the promised one with the Leafs and Team Canada pack. At least they weren't all MVP. The line-up was pretty typical of what I saw on the "Don't buy this" videos.

I'll just hit the highlights of the retail packs, going chronologically, and show everything in the hobby packs. 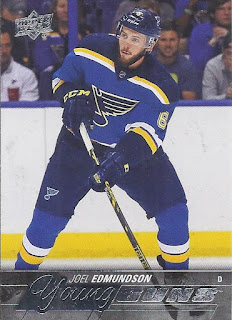 While I did hit a Young Guns card in the S1, it isn't the one that everybody wants to see. At least he's still in the league. 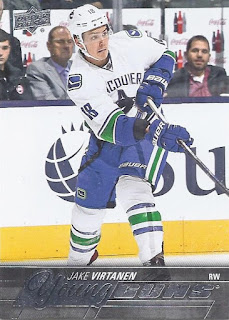 S2 also had a Young Guns card in it. Virtanen isn't the pull that he was back in 15-16, but it is still one of the better ones available. 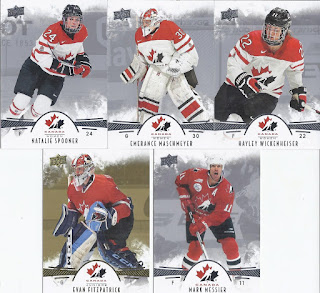 The Team Canada pack did have a few keepers in it. There's a pair of cards that will be on their way to the mask binder. Fitzpatrick is a prospect in the Blues system at this point. There's a nice patriotic card of one HOFer in there, and I can't image Wickenheiser not being inducted at some point.

The Parkhurst pack had a parallel, a Sens card, and what was probably Subban's first card with the Preds. 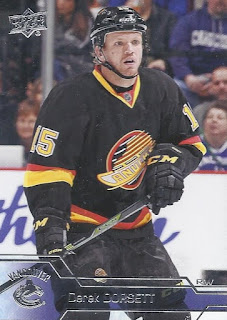 The pack of '16 S1 was just a base card only pack, so I'll highlight the throwback jersey in the pack. 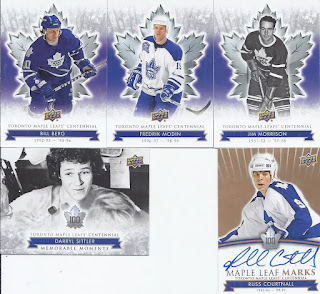 And a hit! And that's a pretty interesting one to get. Courtnall was one of the stars for the Leafs back in the 80s, prior to a puzzling (I'm being generous) trade to the Habs. There aren't too many certified autographs of his out there, as well. So, this might just make the purchase slightly less questionable that it was.

Finally, the 17/18 packs. I'm just grouping these all together because I'm lazy. There's YG card #3, and considering they generally fall 1:6, getting 3 of them is pretty good odds from 6 misc flagship packs. While the Canvas cards generally have better photos than the regular cards, there really isn't any indication of that in these two.

But there you have it. I did land an autograph, so this feels better than the breaks I saw, but still really not worth the inflated price.
Posted by buckstorecards at 10:28