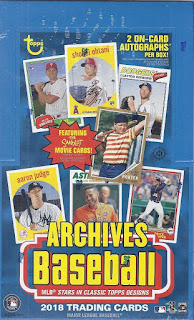 With everybody busting 2019 Series 1, I'll go back a few months and bust a cheaper hobby box of last year's Archives.

Since everybody's probably seen enough of the base cards, I'll go right to the inserts and parallels. 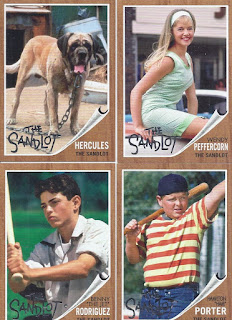 Since there was a lot of love for the Sandlot portion of the insert set, here's the 4 base cards I landed. Without having seen the movie, that appears to be an interesting mix of characters.

Two out of the three rookie history/reprints I got were from Update sets. I'm not sure why I'm highlighting that. It just seems interesting. 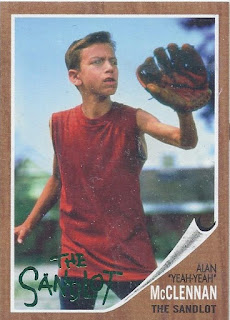 I didn't realize there were parallels of the Sandlot cards. But there were, these green foil parallels are /99 and fell at a rate 1:1083 packs. 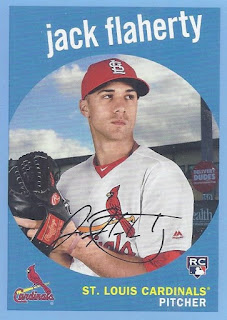 This was the only other numbered parallel I got, being /25. 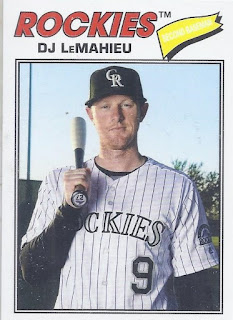 But before I get to the autographs, here's one more parallel, and this one lacks an autograph. Or at least a signature, since it is one of those no signature variants. 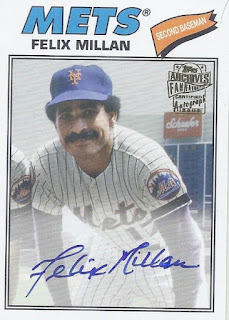 I actually traded for a Felix Millan autograph after failing to get one during a group break (although I was really happy about the Ray Fosse). Now, I've got one for the Mets binder and one for the penmanship collection. 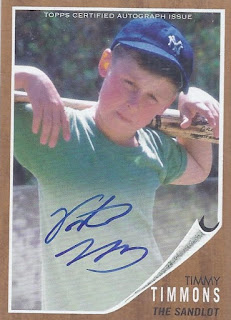 I guess this box was a Sandlot hot box, as here's another appearance of a card associated with the film. As I said, I haven't seen the movie, so I wasn't as elated with this pull as some other collectors. So, this will probably be off to COMC at some point, unless someone can do some major damage to my wantlist.

But there you have it!
Posted by buckstorecards at 11:55