The only other cards in the box were ones for the hockey portion of the set. 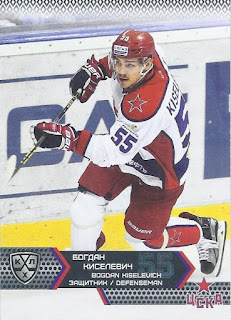 First a new face on a new card, as Bogdan Kiselevich makes his debut in my collection. Kiselevich has been active in the KHL since 2009, and he made his NHL debut this season as 28-year old rookie with the Panthers. He has yet to receive a card on this side of the Atlantic, so, for now, him and Maxim Yakutsenya are the only two people in the collection with exclusively KHL cards. 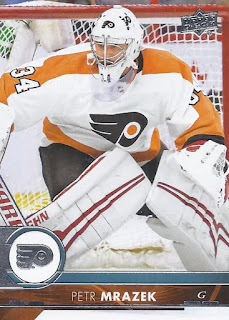 Petr Mrazek is rocking his "I just got traded" mask in an Update card out of SP Authentic. He'd get a proper paint job later on, but has since moved on to the Hurricanes.

And those are the only two unnumbered cards in this bunch. 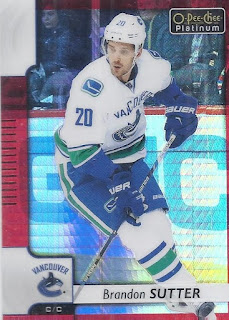 E-packs of platinum make them a cheap grab on COMC, even for shiny numbered cards. It was about 75 cents of credit to get a shiny red Brandon Sutter /199.

That acetate 'Great Outdoors' card of Gaborik is the official "How did I not already have this card" card of this post. Winter Classic photo? Alternate jersey? Eye black? I'm glad that's remedied. 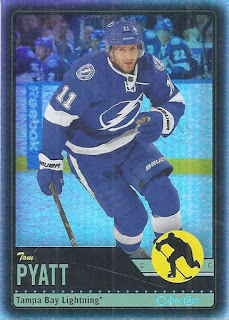 A Senator up until just recently, Pyatt is seen here on a black rainbow parallel /100 from 12-13 O-Pee-Chee. 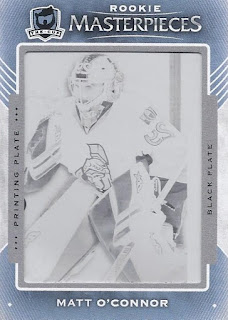 A type makes its first appearance here, both in the 2/14 collection and my collection on the whole. While I have numerous plates in the binders, this is the first framed plate out of the Cup. Much like with National Treasures and Plates & Patches, these originate from other products. This is originally from 15-16 Ice, a rarity where I already had the card made from the plate in my collection.

And there you have it!
Posted by buckstorecards at 12:02