I know I'd posted some nice stuff from late December breaks over the past two days, but the pack-busting deities were also smiling on me in late November. Sens prospect Drake Batherson made his NHL debut, and got a card saluting his debut game goal in UD's Game-Dated Moments set (think Topps Now). 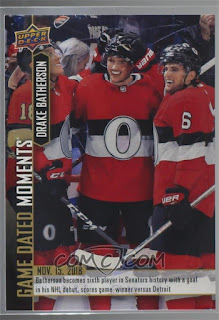 It is now in my COMC inventory awaiting shipment. One of the things with UDGDM is that you have to buy an e-pack hockey product to go with it. I usually just throw in a 99 cent pack of Compendium. But, since this was over Black Friday weekend, there was a sale and you could get a virtual box of the product for about $5.

The only thing you can really pull from them that can immediately become a card is a printing plate. But, why not? And I'm on vacation for Grey Cup weekend, so let's do a nice break from my hotel.

As for the Plate chase: 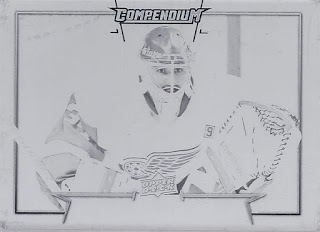 They don't list the odds for plates, but I won't complain. 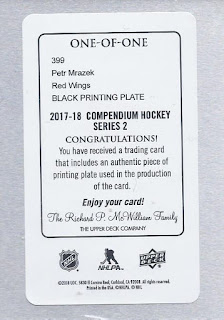 Yup. Not only did I beat the odds with the 1/1 plate, but the plate I landed was one of a 2/14 collection card! I guess it was worth trying out the "box" after all!

Email ThisBlogThis!Share to TwitterShare to FacebookShare to Pinterest
Labels: 1/1, 2/14, epacks