I guess it is time again to start going through my COMC box and pull out some of the 2/14 content. In terms of volume, it was football that ruled the roost this time, and this was what brought the count up. 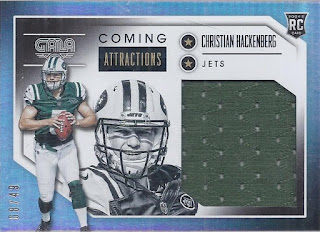 Christian Hackenberg is still a coming attraction, as he still hasn't made a game appearance in the regular season. He spent part of this past season on the Bengals practice roster, and I had no idea that he did. The gala design does look nice though. 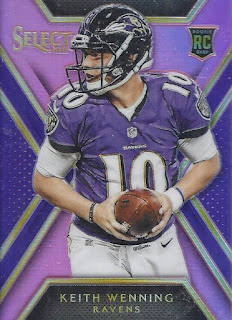 I think Wenning has made one more appearance than Hackenberg over his career. He's shown here on a magenta parallel from Select numbered /199. 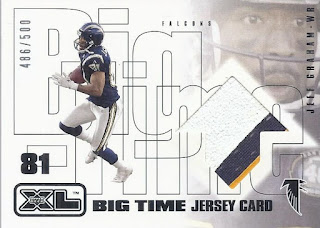 I've added autos of Jeff Graham before to the collection, but this is the first appearance of one of his relics, with a nice three colour patch. He's listed as being with the Falcons here, but he never played a game for him. 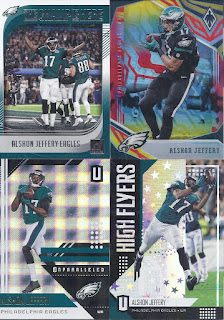 Being at a high profile position, Alshon Jeffery makes a lot of appearances in new releases, even more coming off a Super Bowl victory. I think that makes the least gaudy of these cards my favourite - the one that has a photo dating to the big game. 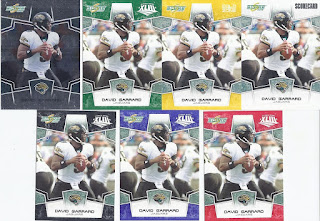 The big winner in this was David Garrard, with 7 different variations of a card from 2008. Why all of these? When I got a numbered parallel of this and was cataloging it, I found there were lots of parallels to it. Easily enough to fill up an album page. Therefore... 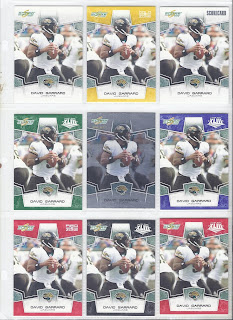