Too Many 2/14 Football Cards

Again, I return to the recent mailer from TMM/TMV in this post, and today, as the title indicates, it is 2/14 football entries in this post. I'm ordering these by volume, lowest # of cards to highest. 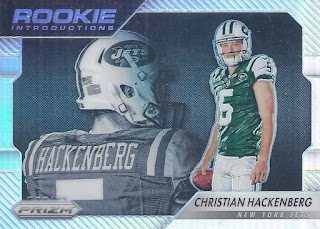 He still has yet to throw a pass during a regular season game, but I still have 15 cards of his. 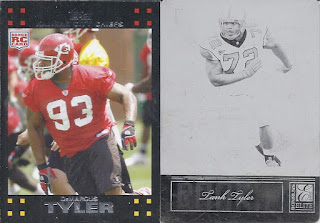 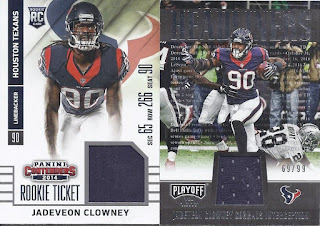 The former #1 pick made a pair of appearances, with both cards containing a swatch. Although there is a date on the card that matches a playoff game between the Texans and Raiders, I'll assume that only the photo, not the swatch is from that day.

These 3 McNairs make him the 4th member of the binder to hit triple digits, joining jim Kelly, Marian Gaborik and Milan Hejduk. 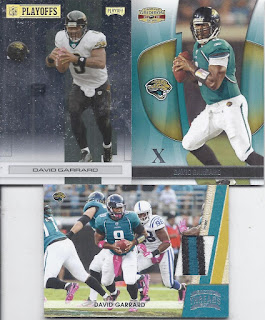 The last trio of cards features David Garrard, all three of which are numbered. The Playoff card is /149, the Gridiron Gear is /250 and the patch relic is /65. 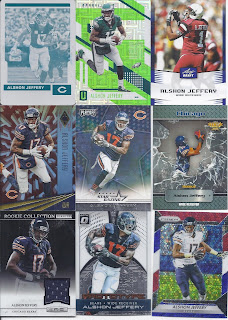 The big winner here was Alshon Jeffrey, who moves into 3rd place in the football category with 86 cards to Bledsoe's 85. The middle right card is from something called TCSP (Tri-City Sports PL), which googling seems to show it is a hit themed repack company, but with nothing positive about it in terms of reviews. But at least it is an obscure addition, and there are some nice shiny/gaudy entries as well. And another 1/1!

Whew. That only leaves baseball to wrap up a 5 post mailer. I'll try to wrap this up later this week.
Posted by buckstorecards at 12:58