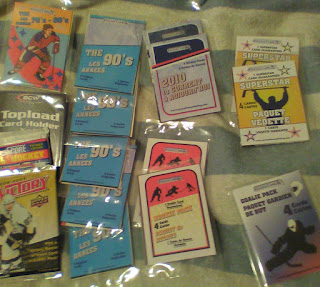 For anything where the total # of cards is less than or equal to what will fit on my scanner, I'll show everything. For the others, I'll hit the highlights. Simple!

So, that basically means just the highlights of the Score pack and the 90s repack, and everything else appears. 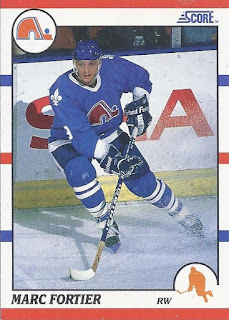 I'll start with the packs. There really wasn't anything notable in the 1990 Score pack, so here's a classic Nordiques jersey. 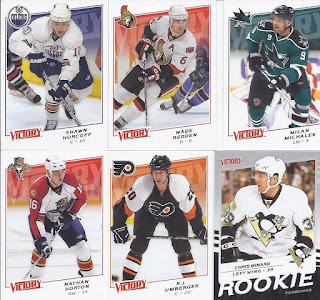 I was hopeful for a new insert for the Victory set, but all I got were base cards. At least there was a Sens card in the mix.

As for the repacks in the repack, I'll just do these in the order they uploaded.

As expected, the 70s/80s pack didn't contain anything 70s, and had the usual pair of 1989s appear. But at least the third card does trace to the early as opposed to the late 1980s. And more Nords blue! 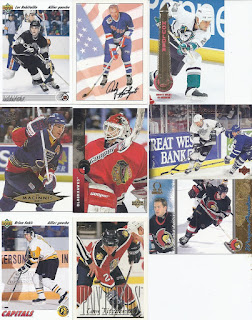 These were the most interesting cards from the 90s packs. Lots of early 90s Bowman and Score, but still some good stuff. French UD! A Sens card! A patriotic card! The Eagle mask! Rangers alum Al MacInnis! That's not bad for all the early 90s stuff. 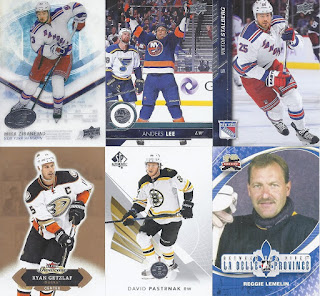 The first of the 2010s pack was very New York, as all 3 cards came from the teams there. The Mika card is an acetate Ice card. 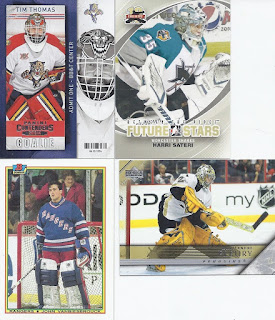 Hey, 3 of the 4 cards in the goalie pack were mask binder cards. I have no complaints about a 75 percent hit rate. 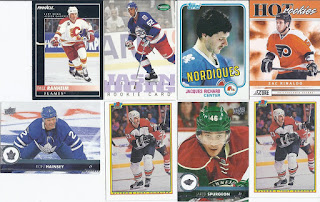 The two rookies in the rookie pack were bland, but the pair of Tony Horaceks, 1 per repack, was at least interesting in terms of collation. As for my favourite card, it surprisingly is the Leafs card, as I love when a card features a smile from a player missing a tooth or 4. 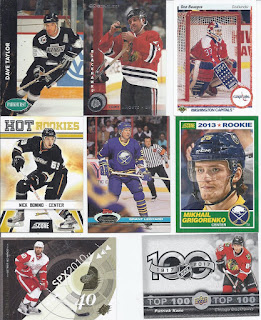 And this ends with the Superstar pack. While the Superstars portion was interesting, based on landing a Tim Horton's card as one of them, I was intrigued by the Grigorenko, mainly because I couldn't place it. I'd recognized the flashback to the 1989 Score design, and knew it made plenty of appearances in that year's football release. But hockey? Turns out this was from a retail insert set called Rising Rookies. I guess it is pretty obscure, since it doesn't even appear on Panini's own checklists on the site.

So there you have it!
Posted by buckstorecards at 07:49