2019 Adventures in Repacks - Part 5 - Basketball Cards from the Dollar Store? 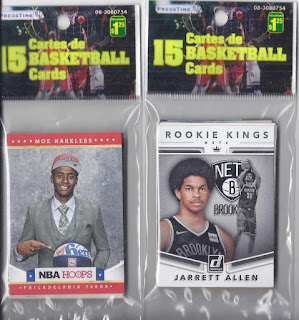 For many a year, hockey cards were the only sportscards available at the Dollarama. About a year and a half ago, baseball cards made their return. Just this week, I spotted these on the racks there. Of course, I had to sample them. I grabbed the first two available. And since these are new, I'm scanning everything. 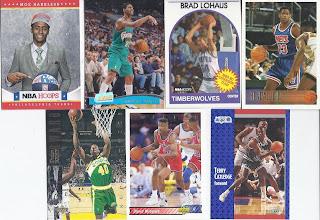 I'm a big fan of the draft day photos with the player wearing the cap of his new team, as opposed to the bland non-action shots from the rookie photo shoots more often used by companies. And there's a Vancouver Grizzlies card as well! Even better, with it being a card from when the franchise existed, it isn't Reeves or Abdur-Rahim, who tend to be the only Vancouver representatives in modern sets. 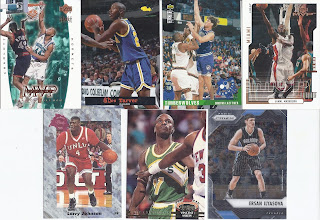 I'm guessing that Larry Johnson was probably a pretty desired card when it was first released. Now, it is repack fodder. With an appearance in this repack of the old Charlotte Hornets, the Sonics, the Nets and the Grizzlies, 5 of the cards featured teams that relocated.

And for those that are horrible at math, there were only 14 cards in this pack as opposed to the promised 15. 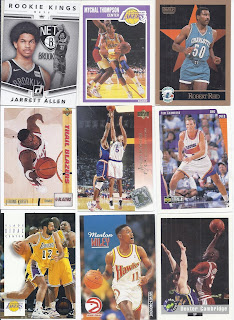 Pack 2 starts off with an insert. I've pulled an Allen auto/relic previously, and he's an interesting guy. The card of the late Jerome Kersey shows that Upper Deck utilized great photography across all their releases. 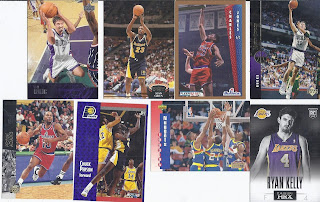 Not a single 1990 Hoops card in either repack? Wow! And again, for those of you that are horrible at math, this repack also didn't have 15 cards in it, but 17. At least it balanced out in the end with there being a total of 31 cards.

There you have it! Can football cards be far behind?

Posted by buckstorecards at 09:08