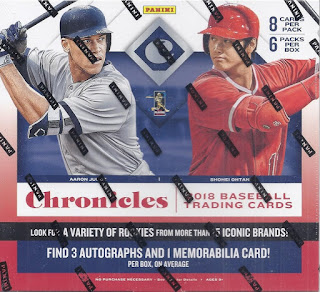 My original plan was to celebrate my birthday by busting a case worth of this. Then I found out a case of this was 16 boxes worth, and went for $1600. I'll stick to two boxes. One today, one tomorrow. 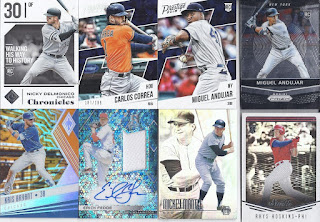 We open with a great pack for numbered cards, with 3 of them, including the hit. The orange parallel of Bryant is /199, with Fedde being /99. Illusions might be my favourite product in this product, (if that makes sense) and that Mantle base card looks really nice in that design. 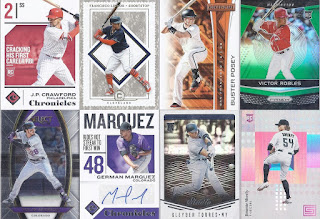 2 more numbered cards here, with the Cornerstones base being /99, and Robles being /50. There's also auto #2. The lack of logos does somewhat limit the photos that can be used, so great choices stand out. So, I do like the Torres photo as it approaches the moment of impact. 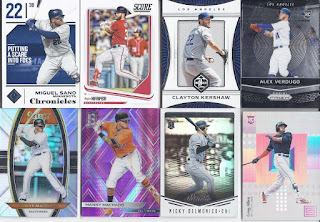 This one is pretty basic, with the highlight here being a pair of shiny Manny Machado cards. The pink is the only numbered card, being /75. 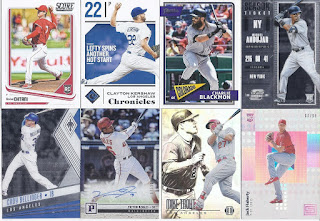 While it isn't the rookie autograph you really want when you see a Washington card come up, that's still a pretty nice one as the best card in the box. That Robles is a purple parallel /10. Again, the design highlight is the Illusions, especially since with the photos chosen, you really don't notice that the logos have been photoshopped away. 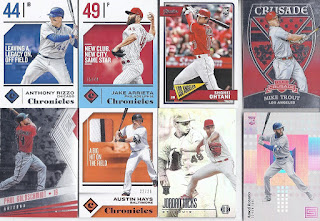 Ohtani actually made two appearances in the Classics portion of the set, with both a pitching and a hitting photograph. That Hays is a nice enough looking card with the patch. Alas, it doesn't really compare to my previous Hays pull from this. 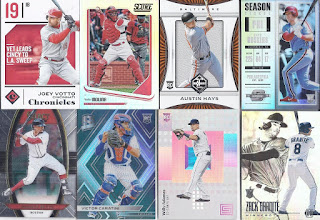 The dullest of the 6 pack, unfortunately, was the final one. But at least there was some shininess contained within.

There you go! No complaints on the whole about this, with the Robles goodies contained with in. Box #2 tomorrow!
Posted by buckstorecards at 07:02