A few weeks back, Samuel over at the Daily Dimwit posted a wantlist for base cards of the various sets in Panini's rather voluminous Chronicles release.  I've busted several boxes of the product, and helped out. And these were some of the cards sent my way in return. 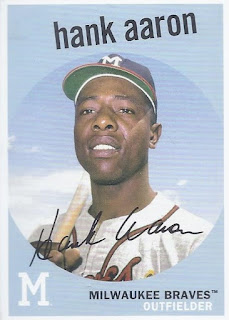 I rarely highlight set builders when I do these, but feel that Hank Aaron definitely deserves to be spotlighted, especially since it is in the #1 spot of Archives. And it is a Hank Aaron card, after all. 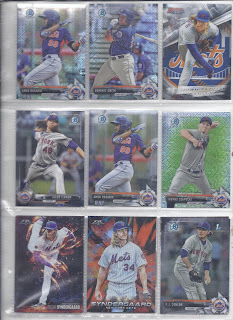 Lots of Mets and Jays among the other cards in the rest of the mailer. I accidentally deleted the scan(s) of the Mets cards, but had at least preserved one of the pages that I'd put some of the cards in. 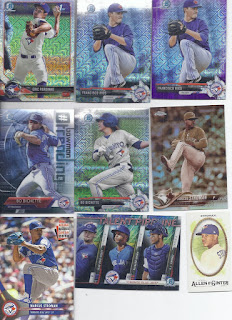 I didn't delete the Jays portion of my scans, fortunately, so you can see a nice (mostly) shiny variety of cards here. I really love the contrast of contemporary shininess with the sepia on the Stroman. 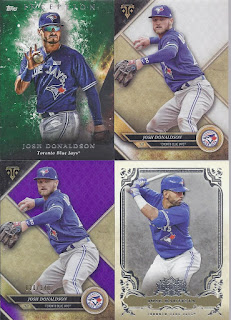 Here's some more Jays from some higher end sets.

And there you have it! This is just one of four mailers that have shown up recently, including a massive farewell envelope from Wes that should stretch over several posts. More Mets in the mail next time!
Posted by buckstorecards at 06:08