I did a true-crime themed post yesterday. I need to cleanse my palate. So, here's a bunch of Sens cards. 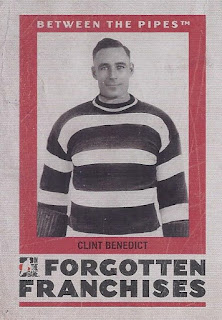 And yes, I consider cards featuring the original run of the Ottawa Senators to count towards the collection. While adding an actual card from the 1930s probably won't be happening, recent cards of the old team are perfect fits. 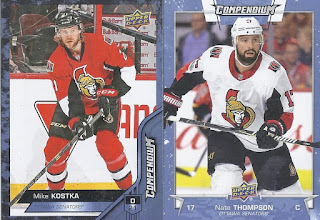 The best thing about Compendium as an e-pack product is that it allows from COMC to have inexpensive cards to be added to the collection featuring short-term team members. Both Kostka and Thompson only spent part of one season in Ottawa, but still had easily-available cards. 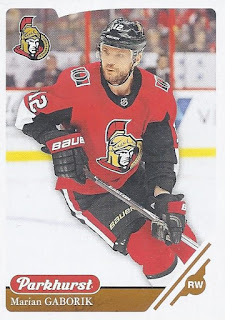 Marian Gaborik has yet to play a game for the Sens this season, but he still gets a card in Parkhurst. This is another product with e-pack possibilities, meaning inexpensive cards at COMC. Even better, this is Gaborik card #186 for the 2/14 collection. 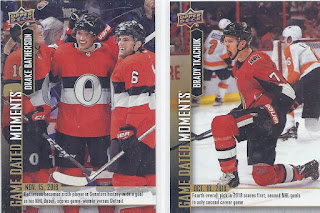 And even more e-pack stuff, with these game-dated moments cards. These two players both made their rookie debuts with the Sens this season, and both of these were their first cards in the collection. These are much like Topps Now in that they're only available for a limited time, but their print-run(s) aren't released. 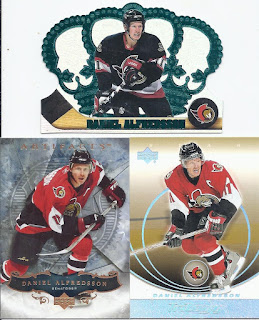 Of course, there's going to be an Alfredsson card or 3 in a group of Sens cards. 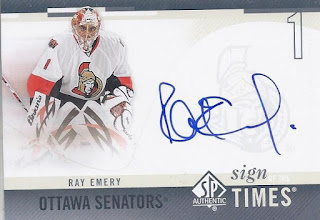 This makes back-to-back posts featuring someone who is deceased, as the late Ray Emery makes an appearance on this Sign of the Times card from 2010-2011 SP Authentic. 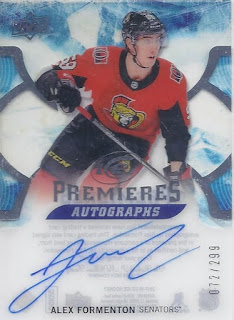 It is going to be autographs with a rookie-theme the rest of the way home. Alex Formenton started the year in Ottawa, but was returned to the London Knights of the OHL. He was injured in the tryouts for Canada's World Junior team, and hasn't seen the ice since December. 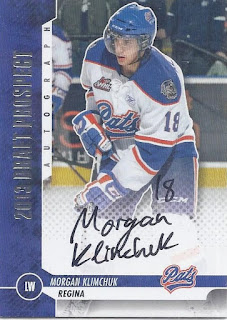 Morgan Klimchuk started the year with the Flames, getting rookie cards in O-Pee-Chee and Series 1. He was then traded to Toronto, and then to Ottawa. He's only played 1 NHL game, as a Flame, but has been active with the Belleville Senators. This card of him with the Regina Pats still counts. Nice penmanship as well. 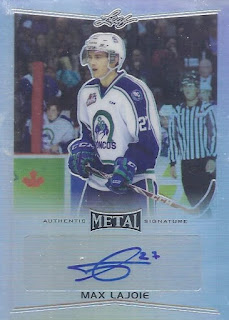 As does a Swift Current Broncos card of Max Lajoie. Ottawa may be ghastly bad this season, but at least there is optimism with their rookie class this year consisting of him, Drake Batherson and Brady Tkachuk. 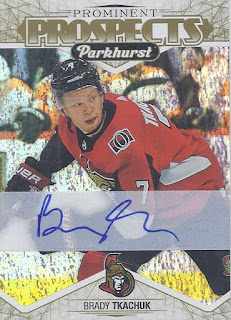 Speaking of Brady Tkachuk, here's his hit debut into my Senators collection and his second appearance in my post. Brady was a first-round pick of the Sens in the past draft, as they deferred sending their 1st overall pick to the Avalanche until the upcoming draft in order to add Tkachuk. At least he's worked out well enough that it won't end up being a Tom Kurvers situation.

And that's a bunch of Ottawa Senators cards!
Posted by buckstorecards at 10:28