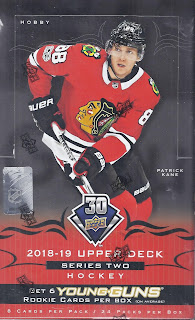 I generally don't do release day posts of boxes. But, with having to make my way through some sketchy weather to reach the LCS, I felt it was worth it. 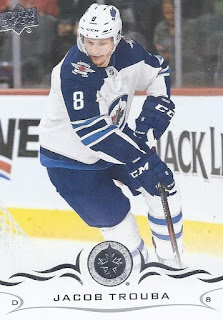 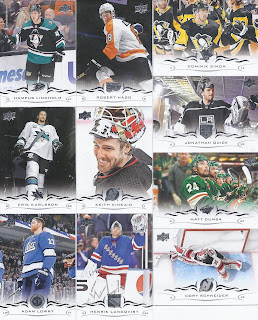 As for the rest of the box and its base cards, here are some of my favourite photographs in the bunch. The alternate Winnipeg Jets jerseys this season are spectacular. They also make an appearance on Patrick Laine's base card, but I opted for this photo from the anthems. I'll definitely be getting a second card of that Keith Kinkaid for the mask binder. He went a little old school with this paint job, doing up the Devils logo in 8-bit format. 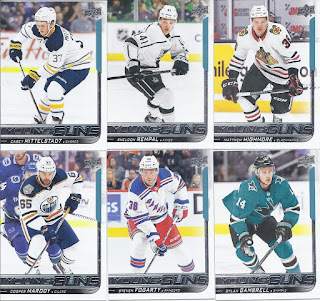 There are 6 Young Guns per box, and these were my 6. Middlestadt is the big one in this bunch. Fogarty is also a pretty interesting one, having been drafted all the way back in 2011, before finally making his cardboard debut. 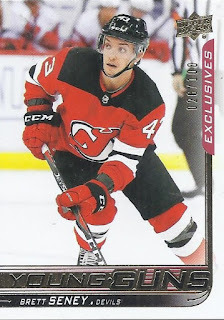 Staying with the Young Guns, let's add a parallel in there with a /100 exclusive. 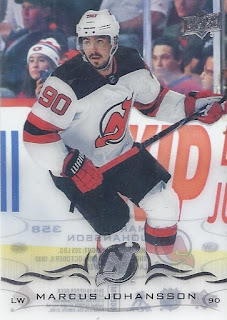 There's more NJD content on the second base parallel in the box. The clear parallels aren't numbered, but fall 1:90 packs or about 3 per case of 12. 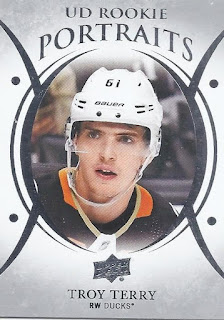 Off to the inserts. I'll start with one of the portraits cards I landed in the box, since these are so dull they'll give you something to look forward to. 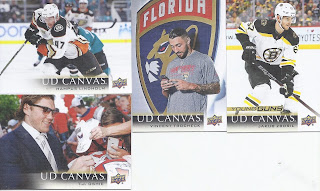 Canvas cards definitely count as more interesting. That Trochek card is just perfect for a release in 2019. YG Canvas cards fall about 1 every other box. 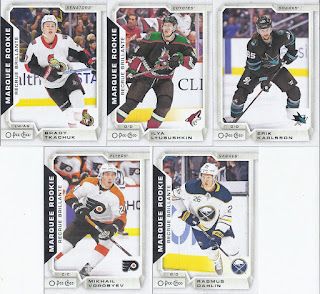 While I didn't get any of the 3 1/2 Ottawa Senators cards among the YG content in the box (Tkachuk, Wolanin, Batherson and a checklist Brady shares with Svechnikov), Brady does make an appearance among the OPC Update portion of the box.  The #1 draft pick, a retro uniform, and the second appearance of Karlsson in Sharks gear in the box make poor Mikhail Vorobyev the dullest card among the OPC. 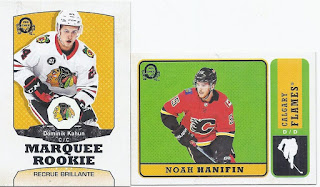 Retro parallels are also brought over from the original OPC release. You get a nice look at the Stan Mikita memorial patch here. 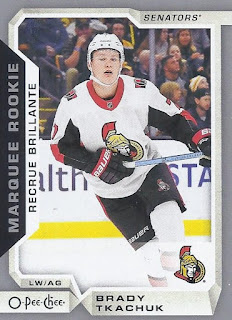 Finally, the silver parallels also move over from OPC into Update, falling at a rate 1:30 packs, or slightly less than 1 per box. I'm happy that the one I landed was the one I most wanted to see from this parallel, a second appearance of Brady Tkachuk in OPC form.

I'll probably pick up a blaster or two to round things out, and then just add the last of the non-YG needs to my wantlist after that.

There you have it!
Posted by buckstorecards at 10:11