As I continue working my way through the mailbag, next up are some Mets cards via 3 PWE's from Tom @ The Angels in Order. Two of them arrived the same day, and the third arrived a week later. I'm not sure which postal service to blame for that. Either way, here are the highlights: 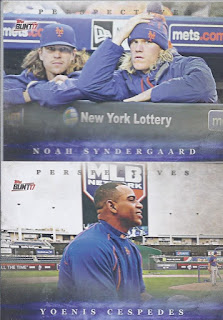 I enjoyed the Perspectives inserts that were in 2016 flagship, but had no idea that they made their 2017 appearance in Topps Bunt. So, almost 2 years later, these are my first cards from that insert set. I like the photos, but this lacked the design to make it as memorable as the 2016s. 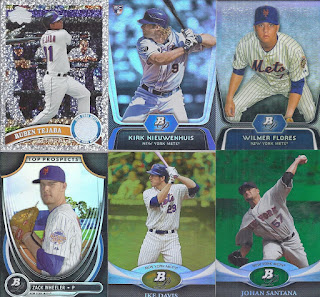 Shininess! Only one of these guys (Wheeler) is still a Met. I'm gonna miss Wilmer Flores. I didn't even catch that Ike Davis retired this off-season until I googled it. 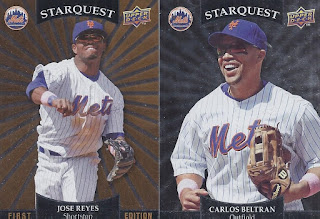 These aren't quite as shiny as the previous but there's still a nice gloss to these two.

The shininess might come to an end, but not the quality, with this 3 pack out of 2005 Flair.

And those are the highlights! Thanks for all these great cards, and I'm still setting aside Angels and Patriots for future mailers!
Posted by buckstorecards at 08:47