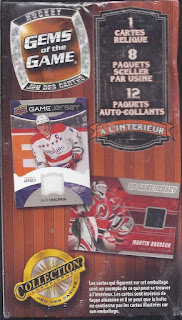 A classic repack box from Wally World. This one contained, along with the relic card, the following packs:

All the sticker packs were 09/10 Panini. For the first post, I'll cover the card packs, ignoring the BAP with the auto, and then cover that, the relic and the stickers tomorrow. As seems to be my most common method of recapping a bunch of packs, I'll attack chronologically. 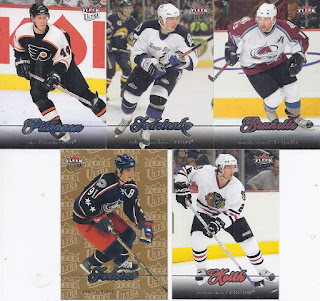 And this is not the most spectacular start to this. I guess the best card here is the parallel, with Fedorov being a Hall of Famer, albeit this coming from a stint that wasn't the most memorable.

And the big surprise was that two of the better cards came from the Victory packs. 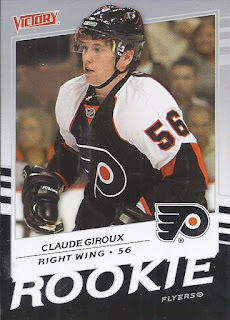 If I'm going to get dupes of a rookie in this, it might as well be the Claude Giroux. 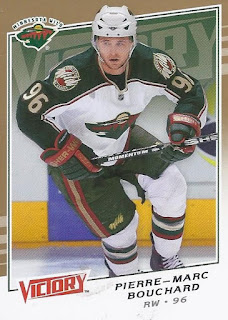 And along with that, why not pull a box hit from a repack box. Gold parallels are 1:36, so those are nice, even if the one I pull is of Pierre Marc-Bouchard. 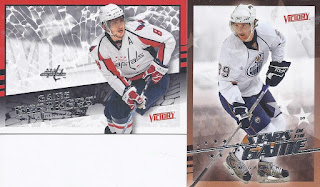 And even both inserts were needs as well. I'm not actively trying to build the inserts, but if more fall into my lap, I can see myself hunting down the rest at COMC/sportlots. I have 24 of the SotC cards, and 22 of the Breakers. Both are 50 cards each. Given their repack frequency, I'll probably knock enough off the list to go for it. 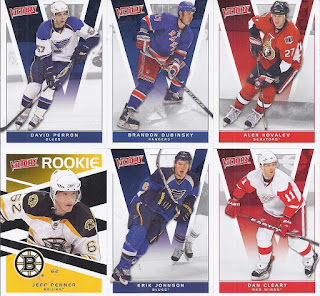 The other Victory pack out wasn't nearly as good, but I did land a Sens card and a Bruins rookie. Even though I had no idea who he was before pulling the card and googling him (2 NHL games more than me, with the same number of points I've put up in the NHL).

At 10 cards, Donruss was the biggest pack, and it did land me a few cards for the PC. At least the rookie in the pack lasted more than 2 games, although he's now in Germany. Among the rest, the Staal looks really nice against the background of a sea of white in the audience, and there's also a Derek Roy for my Rangers alumni collection. 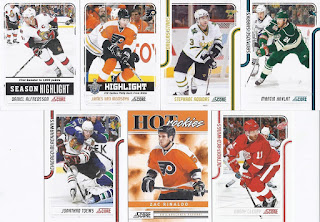 And the Score pack landed me an Alfie! It is a dupe for his binder, but will go nicely into my Sens collection. Great photo on the Toews as well. Score's photo choices were so under-rated, especially considering they matched up against UD's flagship. The 1-per-pack glossy was the Cleary.

This might have been the only repack break ever where the best cards came from the Victory release. Tomorrow, the hits and the stickers!
Posted by buckstorecards at 07:44