The worst part about the checklists for all of this years' Topps releases was the complete lack of any Omar Vizquel card. Not a single one in the regular set. Not even anything in the update set for a final season of a possible Hall of Famer.

The only card out there for Omar was from the Blue Jays was from the annual Jr. Jays Fire Safety set. I'd looked for it on ebay, but really didn't want to drop the shipping cost.

However, a set with free shipping on Listia? Yes!

510 credits later, the set was mine, and more importantly, this card was mine: 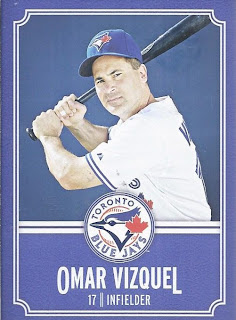 A great wrong has been righted in my Jays binder.

Plus, the only card of Jeff Mathis in a Blue Jays uniform is also mine. 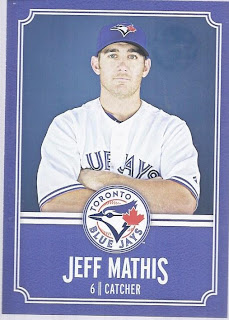 But, I picked up two sets for the same credit cost on listia. I've got the inkling to give that one over the blog at some point in time. Maybe just a random.org draw. Maybe a guess how many X are scored in a particular game/series contest.

Either way, I'll share my good fortune with someone else over the next couple months.

Posted by buckstorecards at 10:40