These have been sitting in my "to be posted" piles for a couple months now. Almost a year back, I started posting cards from group breaks of Team Canada Master Collection, which included autographs and relics from some of the greatest ever to put on the red and white jerseys. I also managed to compile a base set to go alongside all those great hits as well. In theory the /499 should all have the same numbering scheme, but instead are all over the place.

I'm still willing to get into a break of that product here and there to chase some great cards, and I got a few more great ones to show off. Interestingly, all these hits came from different insert sets. 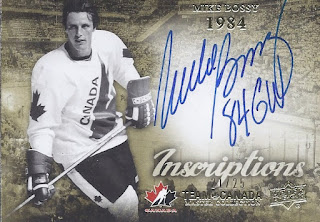 Mike Bossy took the 'Inscriptions' portion of this set seriously, adding on his GWG from 1984's Canada Cup. The goal in question wasn't in the final, but instead from overtime in the semi-final against the Soviets. Sadly, Mike has been moved into pallative care for lung cancer, and it probably won't be long now. 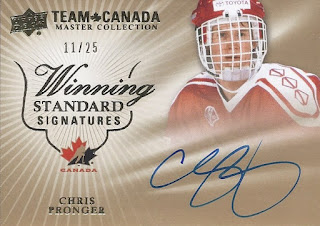 That cage on the helmet just screams 'World Juniors'. At least Chris wasn't too embarrassed by the old photo so he was still willing to add his signature to it. 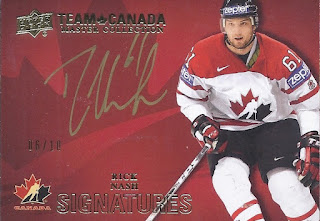 There's still some beautiful gold inked cards to show off. Only 9 more of these out there! I was certain I already had a Rick Nash autograph in my collection somewhere, but it looks like this is my first. 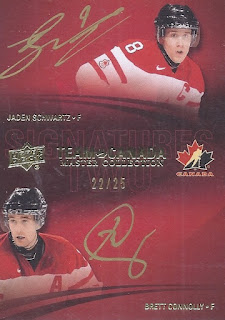 Two heads are better than one, especially when they have autographs beside them!

Yes, there is some literature here as well.

Steve Mason might be the least noteworthy of the cards available in booklet format  in this, but I still love adding this and wrapping up with this. Firstly, he's a Kitchener Rangers alum, and despite only a  partial season here, of course he still counts for the collection. But, I'm still storing this card with the rest of the Team Canada collection.
Also, because this insert set is called Signature Moments, the numbering of this card is SM-SM. I like oddities like that.
There you have it!
Posted by buckstorecards at 05:49