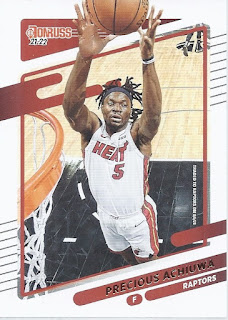 After complaining about his lack of 'traded' cards with the Raptors, my wish to see one of his cards was finally granted by the Donruss release. Sure, he's still in his Heat uniform, and the design isn't really the best. You've got the intruding lines which people tired of in 2021 Topps' releases, and the parallelogram window really gives you too much border.

But still, I have a card of his as a Raptor just in time for the playoffs starting tonight!

I really don't want to do a 'one card only' post, so here's something to accompany the single: 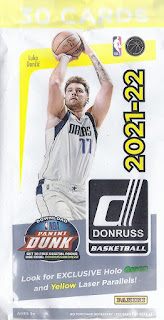 I really would have felt like a sap if I landed a card of his in this pack. Thankfully, I didn't. But what else was in there. 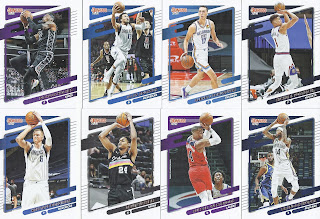 The cardboard fans of Sacramento start it off. Other than that, all the photos are pretty generic basketball card photos, except for the joy of seeing Russell Westbrook 'presenting'. 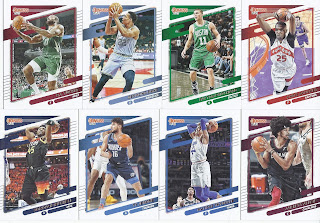 Things get a little more interesting as we move into the second batch. A collector in Portland will note that there is a pair of Oregon Ducks alums the show up back-to-back in this. I really like the photo on the Jarrett Allen, since the player protecting the ball isn't a common theme on cards when compared with flashier shooting photos. 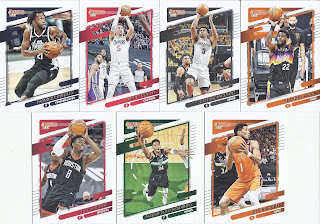 Nice star power at the end of the veteran base with Giannis and Booker. That's also a beautiful view of the Suns' city jerseys on Ayton's card. Even visiting teams in Sacramento get cardboard fans on their cards. 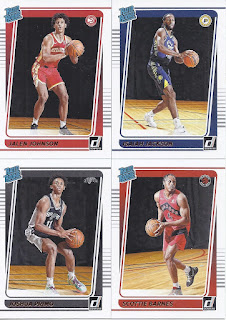 Rated Rookie! Scottie Barnes! YES! And there's some bonus CanCon with the Primo.

Finally, your parallel and your inserts. Joe Harris isn't the most exciting player to land a parallel of, but at least it is shiny.
There you have it!
Posted by buckstorecards at 06:31