Let the Score set build continue with this hanger pack of the product. I just wish I'd remembered how many inserts and parallels were in one of these.

But at least I knocked 3 base cards off the wantlist. There's still 45ish more listed there if you're looking to help.

Exactly the same number of red parallels as base card needs in this. And why shouldn't the insert sets also have their own parallels?

Here's the regular Next Level design. This was one of several subsets in this that return from the previous season. 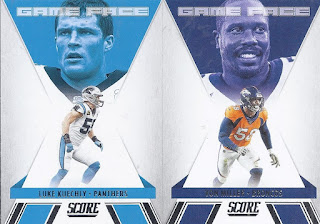 Game Face also returns. I like that there's two different photos on this, but this reminds me of 2019 UD Portraits to enjoy it. 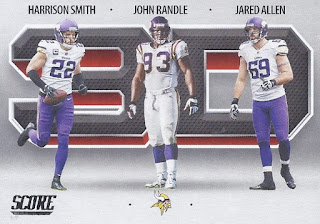 Another returning insert. I like that this year, they've expanded the rosters featured on this to add retired players into the mix.

Although Team Score has appeared before in sets, this might be its debut in football. It's OK, I guess. 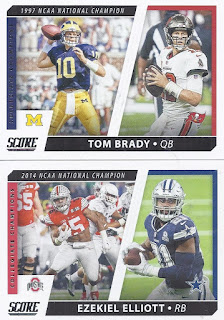 Another debut! Obviously, that Brady is already set aside for a trip to Ann Arbor. 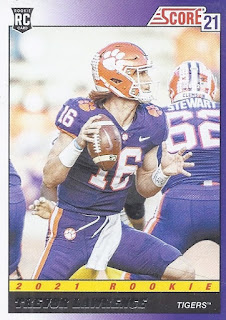 This might be my favourite insert, at least in terms of retail ones. A couple years back, Score flashed back to their debut 1989 set with the 2019 base set. Nothing last year to compare to 1990, but there are 1991 throwbacks in this release. They're a fairly decent representation of the rookies in that base set as well. Getting the one (per pack?) of the #1 draft pick is pretty nice too.
And there you have it!

Posted by buckstorecards at 14:25