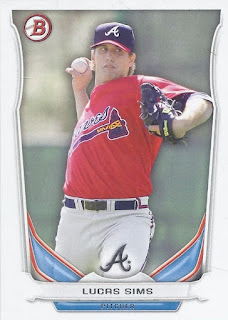 Looks like both the front and back of this repack portion had a Bowman car as the visible one. 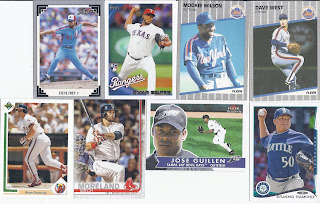 The appearance of two consecutive 1989 Fleers continues here with a pair of Mets. And while they're dupes for that team PC, I won't be complaining about an extra Mookie here and there. Tradition might not be Heritage, but it is close enough for this post. 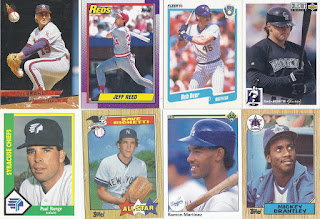 Does a minor league Jays card count towards the Jays team PC? Of course it does. Again, I must point out this is not the serial killer Paul Runge, nor the umpire. If I don't get an actual major league level Jay in this group, the father of one will also work. 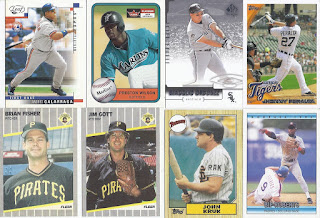 A pair of Wilsons in this 25 car portion, with both (step)father and son appearing. There's Expos content as well, and a grouping of 3 "I did not expect that set in a repack" ends with a nice design from SP Authentic. More 1989-two-in-a-rows, the Ray Kroc patch, and a turning-two-Bip makes the junk wax era ending interesting.
There you have it! Next up, I'll see what's lurking behind that Mondesi.
Posted by buckstorecards at 12:37