And the second of these. 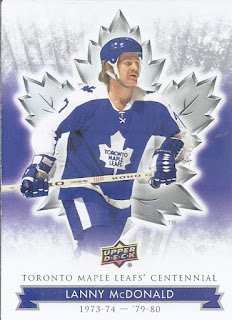 I just grab whichever repack is visible on top. The visible card isn't important to me, but a visible Lanny McDonald will make me gravitate towards that one. Even if it is a Leafs card of Lanny, and without the mustache at maximum bushiness. 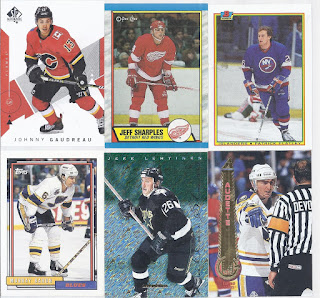 The first grouping of cards. There was a dude named Sharples in the NHL at one point. That's nice to know. That Lehtinen card nowadays would be some sort of 'rain' parallel, but in 1995, that was the base design for Leaf Limited. 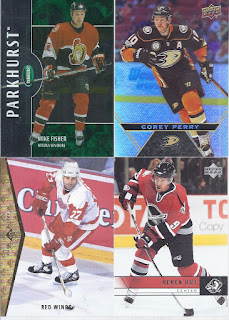 This might be one of the better repack groupings in terms of my PCs. A Senators card I didn't have. Two Kitchener Rangers alum cards that I didn't have. And a food issue card with the Timmies of Corey Perry. 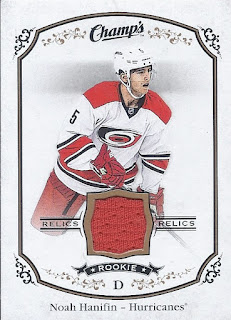 And the hit is a relic from Champ's! If I'm gonna get a relic of a non-PC player, it might as well come from a set I liked. 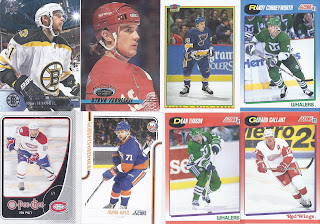 The last grouping of cards was pretty blah. The 2-14 card, like with yesterday's, was a dupe. And that it is an incredibly dull, dull entry of a superstar player out of a Stadium Club green. Whaler green keeps it from being a complete wash. 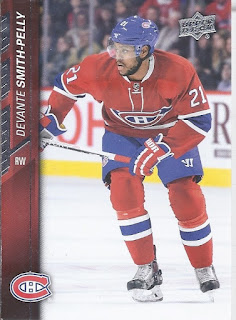 Not even a mascot visible on the other visible card.
The middle grouping of this was really good. But, the first one had more interesting cards throughout the repack to give it the nod over the first one. Still, since these go for about the cost of a hobby pack of flagship, either would have been a more interesting purchase as far as content goes vs sealed wax.
There you have it!

Posted by buckstorecards at 16:52