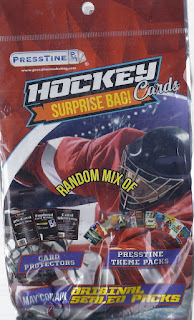 Or Sunday, depending on what day you read this. Repack from the 7/11. 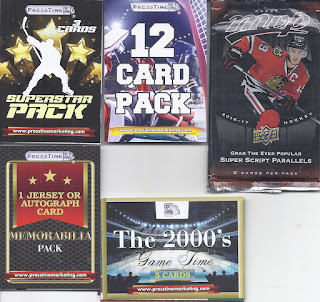 Unopened wax, and a hit in this grouping. I'll be starting from the upper left with the superstars.

And here are the Superstars. I don't know if Eberle counts, the Rangers probably wish Trouba counted, and I guess Malkin is probably the most superstarry of this grouping. 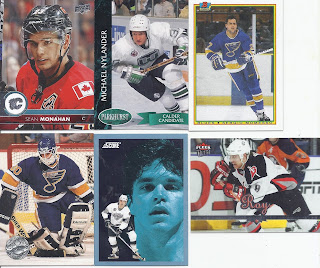 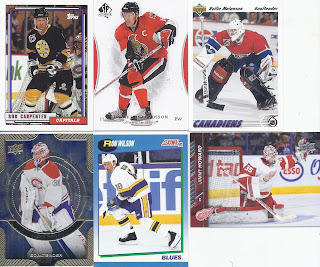 Heck. Based on that Carey Price insert in the lower left, I'm thinking this 12 card miscellaneous grouping is a stronger group than the one that was supposedly all superstars. This is from 2013, before epacks made the Shining Stars inserts absurdly cheap on COMC. Even though they are PC dupes, the Alfie and Roy are also nice adds. 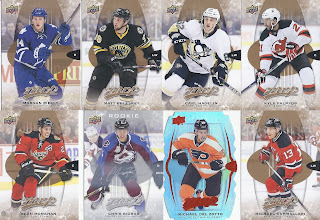 MVP! MVP! MVP! A rookie parallel, and a shiny die-cut stand out here, along with a pair of cards that, like the Trouba, will be bound for Ann Arbor. 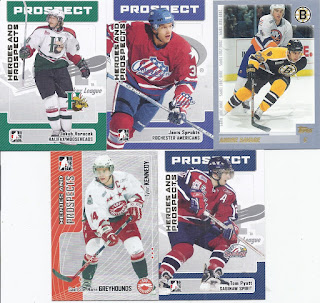 They may have gone a little overboard in terms of Heroes & Prospects content in the 2000s pack. But I won't complain when one of the cards is a new 2/14 card with that Tom Pyatt. WOO-HOO! This puts my Pyatt total at 31 cards of his in that portion of the PC. All four of these prospects did reach the NHL at some point, and Voracek is still there. 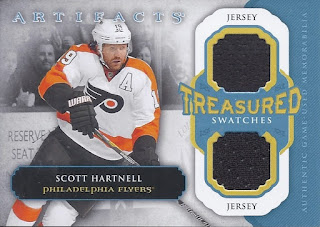 And here's the hit. I was expecting some sort of basic game jersey insert from flagship, so this was a nice enough upgrade from expectations.
A hit, a 2/14 card, an insert, a parallel, and some trade filler. Pretty successful repack!

Posted by buckstorecards at 14:07