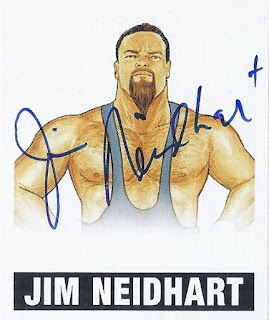 From 1955 yesterday to 2012 today, I'll celebrate the second day of 'Mania with an autograph. Jim might have had one of the best evil laughs in wrestling history. Unfortunately, despite a great run, he'll probably always be thought of as the other member of the Hart Foundation tag team.

This card comes from 2012 Leaf Originals, and they get around licensing issues by using art of the wrestler as opposed to photos. Here, it is really good, although it has been iffy in the past.

To show how long this card has been sitting in my to-be-posted box, I bought this not long after his passing in August 2018. And there's still probably a card or two that's been in there for even longer.

Posted by buckstorecards at 05:02