I'm back with some more gold ink today, but this time, there's a pair of on-card autos for each card. 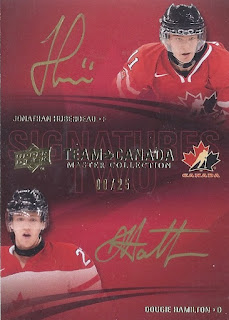 There's three cards for today's post, and it feels strange calling this one the 'worst' of the three. But something has to go there. Given how I power-collected the 2013 Rookie Anthology set, I still really like this card that puts two of the better names of that class on the card. This might be the first time I've really gotten a good look at Hubertdeau's sig, and the way the loop on the J continues to form a lower-case h is pretty unique. 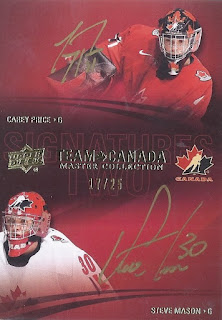 When one looks at this card, one might wonder what connection there would be between the two, since with all respect to Kitchener Rangers alum Steve Mason, he doesn't seem to belong on a card alongside Carey Price. But, they went back-to-back guarding the Canadian net at the World Junior tourneys in 2007 and 2008 respectively, both getting golds in their respective tourney, so they really do belong alongside each other on this card. Nice patriotic masks as well! 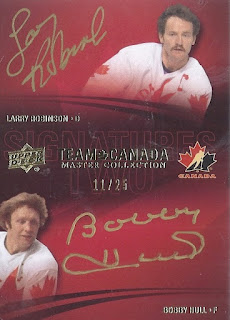 And that Price/Mason does not get my top spot, because this one gets it. A pair of Hall of Famers is perfect for the top spot. Larry's also a Kitchener alum. It is a strange choice for the photo though, as his captaincy would trace that to the 1981 Canada Cup, which Team Canada lost, as opposed to the one before and after this, which Canada won. Bobby Hull was Robinson's teammate in '76, so that probably would have been a better choice. And hey, there's my first auto of the Golden Jet as well! I've already got a Brett auto, so I probably should add a Dennis one to complete the family auto tree.
There you have it! All that's left is the literature tomorrow, and some of it will be wordier that you'd expect.
Posted by buckstorecards at 04:01