Cracking open the most recent bubbler drop-off from Canada Post, which was 138th (approximate) mailer from Dennis @ Too Many Verlanders. 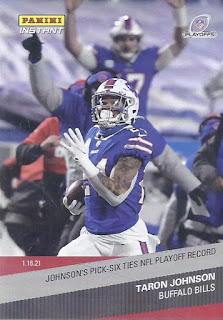 Starting off, here's the Bills card of the season for a fan Forget your National Treasures 1/1 RPAs, this is your winner. A perfectly framed photo of Taron Johnson's 101-yard interception return for a TD. I'd already planned to pick up a card of this moment had Panini issued one, but they managed to make it better by having an elated Josh Allen in the background. When I got sticker shock at the shipping cost of shipping a single card, Dennis stepped in and got this card for me (along with some Michigan alums for his collection). 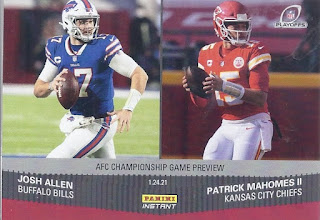 The card was a part of lot that included 5 other cards commemorating the conference semi-finals. Half a Josh Allen is still a great Bills card. 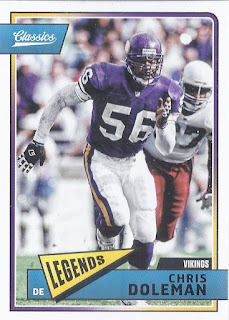 There was some major damage to my set-building wantlist as well. Pretty much the entire veteran content from 2018 Classics is in my hands now. 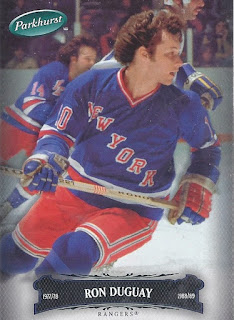 As well as much of unnumbered portion of the 2006 Parkhurst set. WOO-HOO! 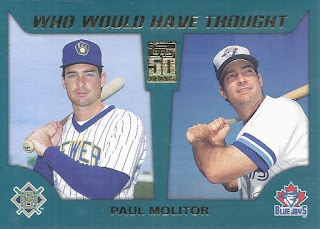 But my most-wanted list also took a hit. Who Would Have Thought was a 2001 insert set that featured surprising transactions in baseball history, whether trades or free agency. During the World Series days for the Jays, they employed a "If you can't beat 'em, sign 'em" strategy to bring in players that had caused trouble for them in the past. Molitor was one of them. I just wish the on-card logos had matched the ones Paul is sporting in the photos. 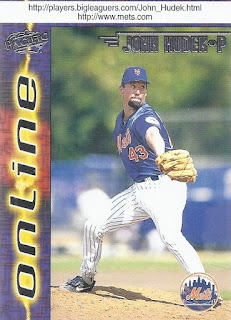 Obscure Met alert! Going 1-and-4 out of the bullpen can help enhance one's obscurity. 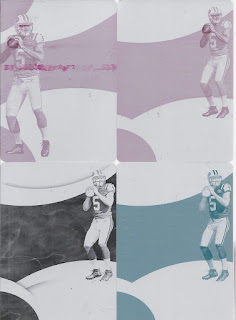 And since it wouldn't be a mailer from Dennis without some 2/14 content, so I'll wrap it up with that. A quartet of immaculate plates featuring Christian Hackenberg. Even at 1 copy each, they're still more of these out there, than passes thrown by "Which ocean?" Hackenberg in the NFL. I guess the missing yellow plate will go on my not-so-reasonable wantlist in the future.
Thanks for the goodies!