The Best of Both Worlds

More relics today, but they're joined by autographs. 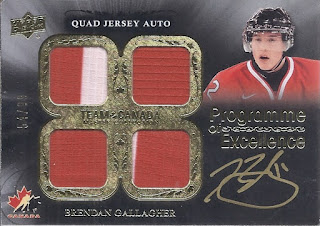 The Program of Excellence sets in other releases tend to highlight younger players from their junior days. While Gallagher's World Juniors experience was quite limited, only picking up a bronze over that portion of his career, although he has developed into a solid NHLer. 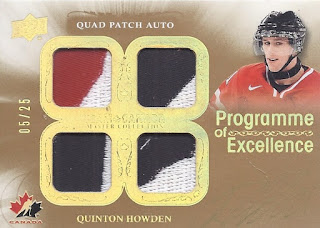 Quinton Howden, on the other hand, is a choice that hasn't aged well. The idea of gold ink on a gold background? That was a horrible idea from the start. 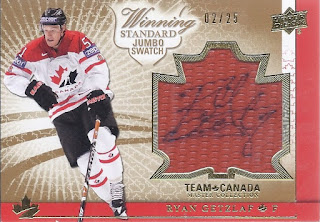 But perhaps this best highlights the concept of combining a relic/auto for a car. Have the player sign on the swatch itself! While there are some sticker autographs utilized on some of the busier multi-player cards, this is as close as it comes with the single-player cards. But it isn't on-card. And it isn't a sticker. But it isn't a sticker auto either. But it is my first autograph of Ryan Getzlaf in the ol' collection, and that's just fine.
And there are more debuts where that came from. I'll get to those eventually, but there's some patches to show off next post.
Posted by buckstorecards at 08:14