Am I Blue? I'm doing GREAT!

Switching ink colour today, and I've got some autographs signed in a more standard colour. 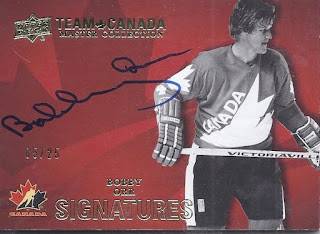 If I had not picked up another Orr autograph earlier via COMC, this would easily have been one of the big hits of the breaks for me. Instead it turns into one of those "I will probably send it to COMC to get some of the money back" card. Now, I can certainly have this put aside for trade as well, but it would take a spectacular offer to get it sent that way. This is from the Team Canada Signatures insert set, but it looks like Bobby didn't get the memo to use the gold pen. 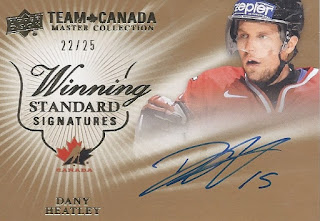 Given that he didn't leave the Sens under the best circumstances, this is probably the biggest dud for me in terms of autographs I landed in these breaks. Still a nice looking card though. 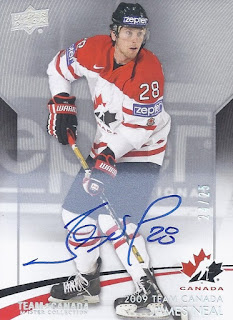 With only a few exceptions, the 50 card base set has a complete parallel set with on-card autographs. I got a few of these, and James Neal was probably the lesser of the three. 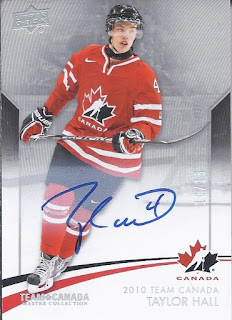 The competition was really good here. Still not enough for a former MVP to take top place among the Silver Spectrum autos.
And that still isn't enough for the #1 spot. 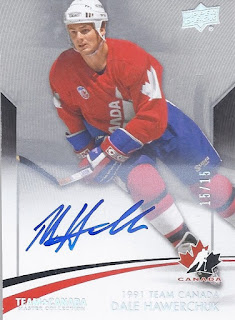 Even if he hadn't passed away last year, this would still be an amazing edition to my hockey collection. People remember the famous Gretzky to Lemieux goal during the 1987 Canada Cup, but you also have to remember that it was Hawerchuk that won the face-off to set up the rush down the ice. Dale played for a few teams over his NHL career, but if I had to choose a team to appear on an auto'ed card of his, it would be the maple leaf of Team Canada.
And as amazing as that was, this wasn't the big auto for this post.
In fact, this came from the very same break that I landed the Hawerchuk auto from, as well as the Messier from yesterday.
What's bigger than those two?
WAYNE
F'N
GRETZKY! 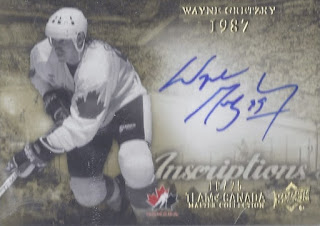 BOOM!
How can I hate any product that lands me my first autograph of The Great One? Even better, this one is a definite reference to the 1987 Canada Cup that I referenced above. How could I even consider myself a hockey collector without a Gretzky auto in my collection? As soon as this was pulled, I sent this off to get it encased, and am seriously considering having this whole thing framed, and put on display.  It looks so beautiful in person, with the blue ink really popping against the sepia/white background.
And I'm still not done.
I still have to show off some multi-player cards, as well as some booklet cards. I still have even more Hall of Famers, as well as some cards that were probably wordier than expected.
There you have it!

Posted by buckstorecards at 05:01