After taking the week-end off, back to working my way through the various Team Canada Master collection break goodies. There are a lot of autographs to show off, so I just decided to break them off into 4 groups. I'm leading off with (mostly) cards from the deepest insert set. While the variety of names in this would mean a few questionable names, there's still some really nice names in here.

The best thing about the depth of this set (65 cards), in a release with only 499 boxes, means the the cards here are very limited. No card is numbered to more than 25 copies. 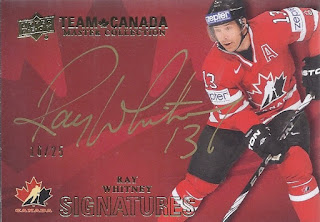 He's not the biggest name in the set, but Ray Whitney more than makes up for that by having what is likely the largest autograph in the set. If you're given that much room to display your signature, you might as well use it. I've already got an auto of his out of Chronology in my penmanship binder, so this is a nice addition to my more generic collection of hits. 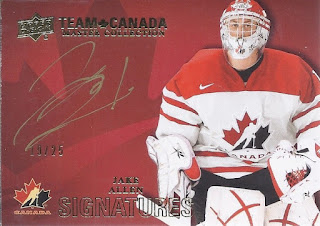 When Jake Allen, a player still in the league and putting up solid numbers with Montreal, is one of the lower-end members of this checklist, that's a pretty solid checklist. This photo is from one of his pre-NHL junior appearances with Team Canada, where he picked up a gold and a silver. 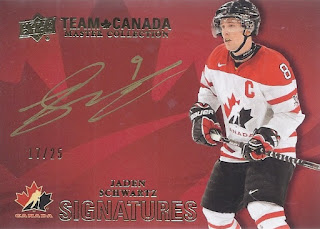 May The Schwartz Be With You! Here's another guy with a solid NHL career. He and Allen would be teammates when the Blues won the Stanley Cup in 2019. Also as with Allen, this photo is from his pre NHL career when he represented Team Canada as a junior. 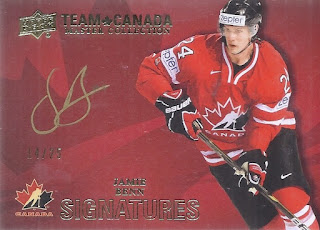 And here's a former Art Ross trophy winner, and he's the one you forgot won the Art Ross trophy when you're trying to remember winners from the 2010s. Maybe Martin St. Louis as well. It's a fairly minimalist signature, but it does still use the provided space well. An he did pick up a gold medal in the 2010 Olympics, so this is a nice flashback to that, even though the photo isn't from there. Surprisingly, this is his only appearance in the set. 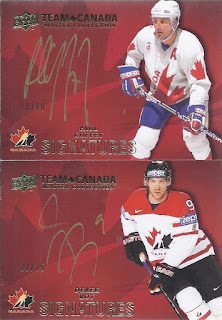 Here's a pair of Kitchener Rangers alum making an appearance in the set. I'm somewhat surprised that this is my first certified Paul Coffey autograph in the collection. His is one of the shorter printed autographs in the set, being limited to /10 copies. The patch he's sporting dates that picture to the 1991 Canada Cup. Derek has a few autos already from 2013 Panini releases. As is the theme with todays, the players use the room provided for them to enhance a minimalist auto. 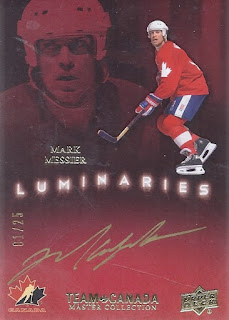 I'll leave the Team Canada Signatures insert set behind for one final golden graph. The Luminaries insert set is a little more exclusive than the TCS one, featuring 8 Hall of Famers among the 10 card set, 1 certain HOFer in Crosby, and one "do you need a fourth?" type with Theo Fleury. Here, it is my first Messier graph. A beautiful design here, and it is so nice the second photo isn't a repeat. First one stamped too! That's an ebay 1/1 that I wouldn't consider selling. Looking at the jersey, it seems we have a second Canada Cup photo.

And there's still more to come! Nothing but ink through Friday!