For the next however many posts, I'll be getting patriotic here. As well as super high-end. Over the past few months, the local breakers have been doing boxes of 2015 Team Canada Master Collection.  Each box contains a complete set, with each card numbered to /499. There's also 22 Winning Standard relic cards, again a complete set, but these are not numbered. Finally, there's 15 additional hits, which consist of patches, autographs, or auto-relics. The additional hits are almost entirely current superstars and retired Hall of Famers, all decked out in Team Canada colours.

Each spot in the breaks guaranteed you one base card, and one Winning Standard or additional hit. I got into quite a few of these, and got enough base cards to get close enough to a complete set that I decided to just put the finishing touches on it through ebay/COMC. While I still await the final 3 cards to arrive from COMC, now is as good a time as any to start showing off the goodies that make up this set.

I'm breaking this up by type of card, so first up, here's a portion of the regular base. 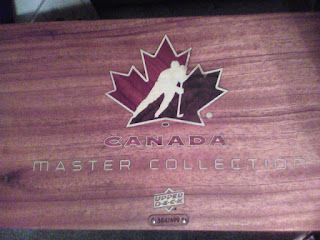 Oh yes, the box itself was one of the prizes. It is a really nice looking wooden, hinged box, with foam inside to hold all the base cards in place. Or, one could do as I did, and take out the foam, and use the extra space to store all my Team Canada cards from various sets. And just like the base cards, the box is numbered as well. All the base cards in this were the 354/499 numbered versions. 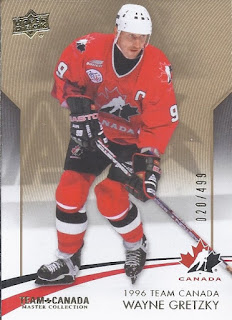 Appropriately for the set, it is Wayne Gretzky that leads the way in this set with card #1. As you can see, this is 20/499. You'll see a lot of different numbering in this post, making my set one of the more Johnny Cash "One Piece at a Time" sets out there, since I'll assume most people kept it intact. 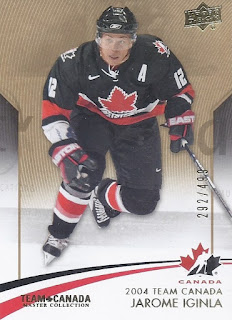 The fun thing about this set is that you get a great variety of uniforms on display that Team Canada has sported over the years. 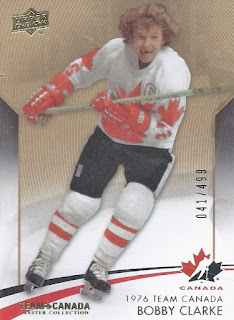 While the photography isn't the big attraction for this set, this photo of a gap-toothed Bobby Clarke is a pretty spectacular one. 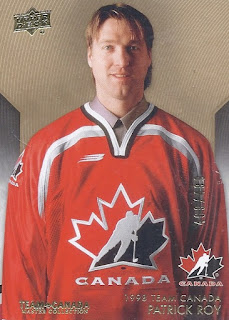 While most of the photos are of the action variety, there are a couple posed shots. Also, for the more juvenile among us, note that this is number 469/499. 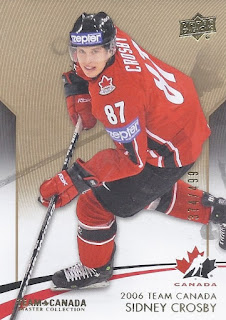 If I'm going to show the starting half of the 2010 Golden Goal combo with Iginla, I might as well also show off the finishing half as well. 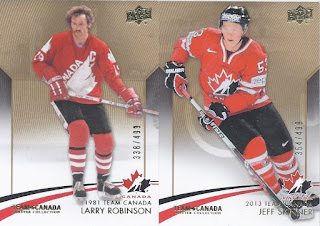 Are there cards for my PC among this base set? Of course! There are three Kitchener Rangers alum here, with this pairing of Larry Robinson and Jeff Skinner being joined with a Paul Coffey, which was one of the three 'on the way from COMC' cards I mentioned earlier, alongside there with a Subban and a Tavares. Also, the Jeff Skinner, being 354/499, would have originated in the box that I lead off this post with a picture of. 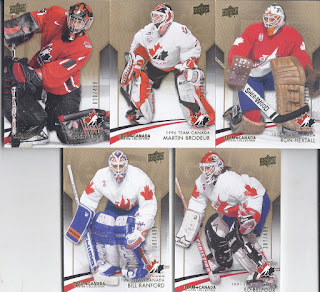 There are also mask binder cards as well, even though most of the goaltenders in the set are just wearing their regular NHL masks. The Carey Price is the closes thing to a great action shot in this set. Again, the more juvenile among us will note the Hextall is 420/499.
And there you have it! Plenty of swatches on the way for the next post.
Posted by buckstorecards at 07:15